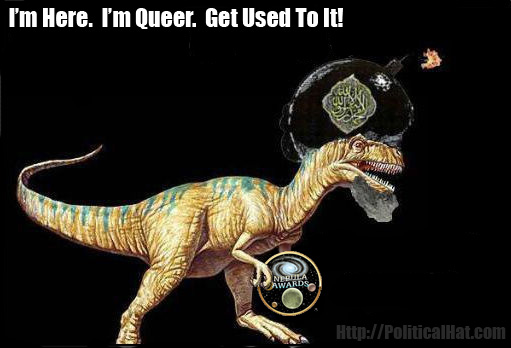 No, this is not a lame joke.  It’s worse.  It is a Hugo-nominated “short story” by a Nebula award winner.  An example passage:

“A T-Rex, even a small one, would never have to stand against five blustering men soaked in gin and malice. A T-Rex would bare its fangs and they would cower. They’d hide beneath the tables instead of knocking them over. They’d grasp each other for comfort instead of seizing the pool cues with which they beat you, calling you a fag, a towel-head, a shemale, a sissy, a spic, every epithet they could think of, regardless of whether it had anything to do with you or not, shouting and shouting as you slid to the floor in the slick of your own blood.

“If you were a dinosaur, my love, I’d teach you the scents of those men. I’d lead you to them quietly, oh so quietly. Still, they would see you. They’d run. Your nostrils would flare as you inhaled the night and then, with the suddenness of a predator, you’d strike. I’d watch as you decanted their lives—the flood of red; the spill of glistening, coiled things—and I’d laugh, laugh, laugh.”

Sarah Hoyt points out the elitism of this award-nominated rant:

“A story that reveals a total lack of knowledge of an entire class of people (manual laborers) and instead others them as sort of scary all purpose evil that will beat to death anyone who doesn’t look/act like them won an award voted on by – supposedly – adult professionals. Not only that, but adult professionals who keep claiming their tolerance and love of the ‘other.’  What’s more, adult professionals who would almost certainly embrace ‘Marxism’ as a good or at least correct idea.  When did Marxists start loathing and fearing the working class?  And admitting it?

“Leftism is hatred. Everything that is normal, sane, healthy, holy, rational, or good, they hate.  They hate the death penalty for murderers and love suicide and euthanasia. They have daydreams about the human race being wiped off the globe, in order to preserve the Guatemalan water snake or the Puritan stink bug. They hate marriage and love sodomy. They hate wealth and success. They hate population; they hate people. They are fearless when it comes to Jihad and fearful when it comes to the weather. They love abortion most of all: nothing gives a Leftist hearts in his eyes faster than contemplating a score or a hundred dismembered dead babies piled up in a heap outside an abortion mill, and denied a Christian burial.”