The Treason of Robert Reich

Former Clinton cabinet secretary Robert “Afflict the Comfortable” Reich has previously declared those who dare to dissent from the proscribed Progressive way of governance to be treasonous and otherwise naughty.

He has doubled down and declared that those who disagree with him are part of a treasonous cabal to apparently enslave the people: 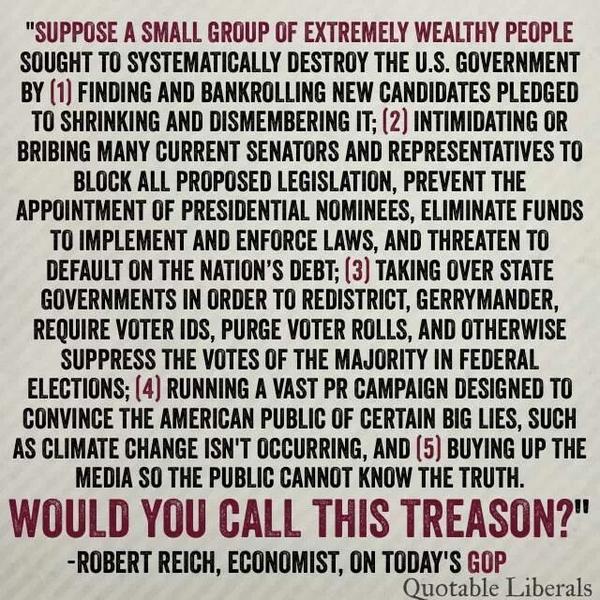 Let us address Reich’s paranoid fantasies, shall we?

Just how is this treason?  People supporting candidates who believe in shrinking the government and “dismembering” bureaus and agencies is not treason.  It is just disagreeing with the size of government.

In contrast, Reich’s expansive government obsession far beyond the legitimate power of government would seem to be far closer to treason, as it is extra-Constitutional and aids and abed those who wish to destroy the government of the Constitution.

“[I]ntimidating or bribing many current senators and representatives to block all proposed legislation, prevent the appointment of presidential nominees, eliminate funds to implement and enforce laws, and threaten to default on the nation’s debt;”

Just who is blocking proposed legislation?  The GOP House of Representatives have passed plenty of bills to address a plethora of issues.  The Senate, under Harry Reid, has refused to take it up.  Perhaps what Reich is referring to, the House’s refusal to blindly rubber-stamp Obama’s Imperial dictates?

Preventing “appointment of presidential nominees”?  It is the power and the duty of the Senate to approve, or not, Presidential appointees.  Obama’s predecessor, George W. Bush, had plenty of nominees blocked.  Funny how Reich did not have apoplectic fits back then.

Another power of Congress?  The “power of the purse.”  They can fund or not fund whatever they like.  As for defaulting on the debt, the debt is guaranteed; Welfare spending isn’t.  Hardly treason.

An Imperial Presidency where the President automatically gets to spend, appoint, and legislate without the Congress approving (or even being consulted), tramples on the Constitution and veers us towards de facto dictatorship.  A bit closer to treason, isn’t it Mr. Reich.

“[T]aking over state governments in order to redistrict, gerrymander, require voter IDs, purge voter rolls, and otherwise suppress the votes of the majority in federal elections”

Redistricting is what states, regardless of who controls them, are required to do.  Gerrymandering has been done by Democrats, Republicans, Whigs, Federalists, &c. and is hardly “treason.”

Voter ID’s and removing dead or ineligible voters does not “suppress the votes of the majority.”  It insures the legitimacy of the election and the vote of the majority of eligible voters.  But then, that makes it harder for the people that Reich fancies to steal elections and turn our representative government into a hand-puppet for the elitist few.  Hmmm, sounds almost “treasonous,” doesn’t it?

“[R]unning a vast PR campaign designed to convince the American public of certain big lies, such as climate change is a hoax”

Defrauding people into giving up their freedoms so that an elitist few can, via the government, control almost any aspect of the people’s lives, while those same hypocritical elitists get rich and pump out CO2 left and right, sounds pretty treasonous to me.

People calling out such shenanigans… not so much.

“[B]uying up the media so the public cannot know the truth.”

When did the Left put up for sale most major newspapers, NPR, CNN, MSNBC, the major T.V. networks, DailyKos, &c.???

Is all this “treason”?

It is if you are Robert Reich.

This entry was posted in Progressives and tagged Democrats, Leviathan, Patriotism. Bookmark the permalink.

One Response to The Treason of Robert Reich