Quick Takes – Leftist Demand Government Be In The Bedroom, and in Your Healthcare, but Stay Silent about Thad Cochran’s Barnyard Shenanigans

Remember how the Left and the Democrats used to say they wanted to “keep government out of the bedroom”?  That little lie didn’t last long once they got a deathgrip on government:

“But a law co-authored by L.A. state Sen. Kevin de Leon would have state-run college campuses establish an ‘affirmative consent’ standard for its students.

“According to the language of the bill, SB 967, students who want to have sex must essentially establish that there has been ‘an affirmative, unambiguous, and conscious decision by each participant to engage in mutually agreed-upon sexual activity.'”

While this may seam to just be a case of saying students should make sure that what they think is a “yes” really is a “yes,”  the burden it creates is incredibly ambiguous.  The only way to be secure against a false accusation of rape is to get a notarized statement for each and every step taken in sexual conduct.

Further, it probably isn’t Constructional… though that has never stopped the Left before:

“Requiring people to have verbal discussion before sex violates their privacy rights, under the logic of Supreme Court decisions such as Lawrence v. Texas (2003), which struck down Texas’ sodomy law, and federal appeals court decisions like Wilson v. Taylor (1984), which ruled that dating relationships are protected against unwarranted meddling by the Constitutional freedom of intimate association.”

The Left, unsurprisingly, outright fails at biology.  Their twisted ideas of what is deemed “privacy” and what isn’t can be seen by Ohio state Senator Nina Turner who likened abortions with… viagr*.

“Before getting a prescription for Viagr* or other erectile dysfunction drugs, men would have to see a sex therapist, receive a cardiac stress test and get a notarized affidavit signed by a sexual partner affirming impotency, if state Sen. Nina Turner has her way.

“Under Senate Bill 307, men taking the drugs would continue to be tested for heart problems, receive counseling about possible side effects and receive information about ‘pursuing celibacy as a viable lifestyle choice.'”

Of course, Viagr* is intended to restore normal bodily functionality, while abortion and contraceptives are intended to disrupt that.  If Viagr* is potential dangerous, then it shouldn’t be treated any differently from any other drug… including contraceptives.  This bill by Turner, though, is a paragon of Leftist delusion and stereotyping of those that they disagree over this topic. 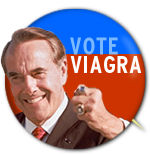 There is also a very good reason to leave private things private: Sen. Thad Chochran, who is trying to stave off defeat in the primary run-off for Senator from Mississippi, waxed poetic about  his “indecent acts with animals”…

Just a joke… much like the vast majority of politicians…

But hey, species is just a social construct… right?

One Response to Quick Takes – Leftist Demand Government Be In The Bedroom, and in Your Healthcare, but Stay Silent about Thad Cochran’s Barnyard Shenanigans