Belgium Aims to Censor the World

Europe, and specifically Belgium, sinks even more towards totalitarianism and the outlawing of “incorrect” utterances.  Not willing to sit back and enjoy the slaughter of children under the guise of “compassion,” Belgium has decided to outlaw any and all speech or communications that anyone in Belgium subjectively finds sexist, and allow prosecution of the dastardly utterers of naughty speech anywhere in the world. 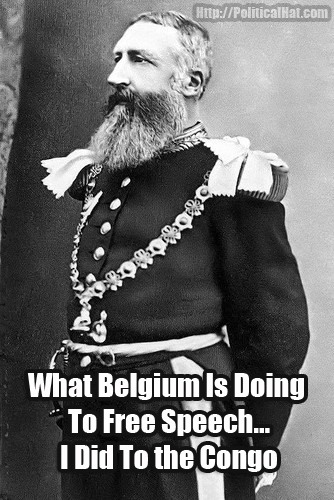 This “Anti-Sexism Act” (Antiseksismewet) is a broad ranging ban that includes utterances in person, but also all books, magazines, the internet, and any other form of communication now known, or may be known in the future.

This is not limited to persons actually present in Belgium.  If you send an e-mail, tweet, or write an article on the internet that is accessible in Belgium, you could be criminally charged.

To make matters worse, the law is so vague as to allow prosecutors to exercise arbitrary and capricious judgment on anyone in the world:

“The biggest problem with this new law is that its text is drafted so vaguely and broadly as to render its application limitless. ‘Sexism’ is defined as any gesture or action ‘intended to express contempt’ towards someone because of their sex, or ‘to regard a person as inferior’, or to ‘reduce someone to his or her sexual dimension’. Additionally, a ‘violation of someone’s dignity’ is required.

“It is entirely unclear what all of this is supposed to mean. The explanatory memorandum to the law states that the proposed definition has ‘the advantage of including a range of facts that are not covered by pre-existing criminal provisions’. This is true: the proposed law will create unprecedented censorship capabilities.”

And censorship is the point.  This is wholesale censorship where the vagueness will drive booksellers, internet providers, &c. to censor according to the broadest possible interpretation of the law, lest they face the wrath of the state:

“While it is unlikely that anyone will ever be extradited to Belgium to face sexist-speech charges, the new law still raises the spectre of international censorship. So Belgian broadcasters and internet service providers may be forced to block websites, and vendors could be prohibited from disseminating books and magazines.”

It is almost as if the Belgians read “1984” and thought to themselves, “poseurs.”

This entry was posted in Progressives and tagged Europe, Leviathan. Bookmark the permalink.