The Left claim that slurs against lesbians and gays are so horrible so as to be “H8 speech” and unprotected by the 1st Amendment.  Funny, then, how the most spiteful and bigoted anti-gay slurs are spewed by those very same Leftists! 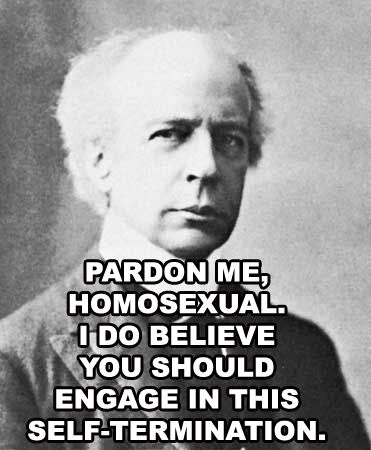 In a screed against DiMaio, he is called a “Mary” and then attacked for not following an agenda that was pre-prepared for him.  What were some of these acts of “self-loathing”?  First and foremost, it was DiMaio’s desire to focus on fiscal issues rather than social causes.

The Left believes that people are but categories.  The Left, after denigrating people into little categories defines what the “interests” of said category of persons.  Individuals within these categories are thus expected to care first and foremost about advancing the part of the Leftist agenda affecting their group.

This is but Social Corporatism:

“This basically involves dividing people up into different groups and denigrating them such that their only worth is in being part of that group.  The state thereafter comes in and ‘arranges’ these groups, as well as other matters, to the benefit of the state, or the collective whole.  Since everyone is simply a part of Leviathan, what benefits the collective whole allegedly benefits them, and people can have nothing that the state does not grant them.”

Thus, gays and lesbians are only worthy of protection if they speak and do as they are told.

What are the sins of Mr. DiMaio?  Why, for opposing another Republican for “his support of Senate Bill 48, the FAIR education act, which mandates that the contributions of the LGBT community be taught in public schools.”

How is that “self-loathing” to oppose social engineering?  It is sad that we’ve gotten to the point where appreciating the positive contribution of all individuals regardless of their sexual orientation, is considered a H8 crime, and only by singling out individuals because of their sexual preferences can one achieve moral purity.

Mr. DeMaio is condemned because he does not his sexuality define him as a human being.  Wasn’t that the alleged claim of LGBTQ campaigners, that gays and lesbians shouldn’t be treated differently from heterosexual?

He is only taking the same approach that Booker T. Washington did with Blacks: A “go slow” approach to being treated equally and to be considered no different that heterosexuals.  Gay marriage is quickly becoming a fait accompli and the government has really turned to punishing people who have moral qualms about homosexuality.  With the wind at their backs, why shouldn’t gay and lesbian individuals have differing political positions on subjects that have nothing to do with sexuality?”

It is the failure to do as he is told and advance the agenda as the Left demands he do, that has resulted in his condemnation.  Mr. DeMaio has said:

For that, he is metaphorically tarred and feathered.  He becomes the target of anti-gay slurs and hatred because he does not proactively push the agenda the Left has laid out for him.  The Left condemn conservatives for pushing a social-issue agenda they deplore, yet they equally hate it when they do not!  To quote a Sith Lord: “You are either for us or against us.”

Even if they agree with the Left’s agenda, gays and lesbians will be condemned for not advancing the agenda forcefully enough, as a lesbian Hawaiian legislator found out.  Strike two.

State Representative Jo Jordon voted against legalizing gay marriage in Hawaii because she believe that that “religious exemption was not adequate enough…I really am not happy with the exemptions. Too narrow.”

What was the response to this defense of religious liberty?  She was “blasted by the GLBT community,” and that was even when she was undecided!

Why did she oppose the bill and support religious liberty?  Because she wanted to make sure that same-sex “marriage” would not be overturned in the courts!  She stated:

“I’m not here to protect the big churches or the little churches, I’m saying we can’t erode what’s currently out there. We don’t want to scratch at the religious protections at all, because if we don’t create a measure that’s bulletproof, or as close to bulletproof as possible, then the measure will go to the courts.”

So, simply wanting to doing things properly is anathema when it slows down implementation of the Leftist agenda.  Ms. Jordon, btw, is a Democrat.

The third strike involves the Libertarian Party’s candidate for the most recent mayoral election in Washington D.C., Bruce Majors.

The Gay and Lesbian Activists Alliance (GLAA) sent out questionarres for the mayoral candidates, and rated Bruce Majors, an outspoken supporter for gays and lesbians, very negativly.

Mr. Majors himself has noted to your humble author:

“I think it’s clear the surviving GLAA members (who are not very numerous – this is a rating put out largely by a few people – if you dig through their website you find only two names, Rick Rosendall and Bob Summersgill, their third active member, Barrett Brick, a Republican, passed away this year) are statists.  (Summersgill actually tweeted nastily two years ago when I ran for Congress as a Libertarian in 2012 that no one need pay any attention to me picking up petitions, since I was running as a Libertarian – and I then got a high enough vote, 16,700 votes, to get the Libertarian Party permanent ballot status in DC).  They actually say in their press release on the scoring that they ‘interpreted” my (lengthy) answers as “negative or non responsive’ because they don’t like libertarians, because it is an ‘unusual’ ideology that ‘mistrusts’ government.  Which this year of all years means the GLAA has shown themselves to be completely antiquated and out of touch with public sentiment.

“But beyond this there is a brown nosing/rent seeking element to GLAA’s ratings.  They actually rate the Green Party members almost as low as they do the Libertarians, and give their high rankings to, as the headline of their press release crows, incumbent Democrats.  One suspects the Greens would fund all the programs GLAA likes to put gays on the dole and give them a government housed, state controlled gay community center at a much bigger budget than the Democrats.  But since the Democrats are much more likely to be elected, GLAA members want to curry favor with them.”

Mr. Majors has some choice words for this Leftist group:

“The problem with GLAA is that they should rename themselves the Statist Gay Activist Group or the Democratic Party Gay Activist group etc.

“They are entitled to believe that only their approach of regulating heterosexuals they dislike and putting gays on the dole is just or productive.

“But they aren’t entitled to pretend that other gay people who believe that freedom of association and of disassociation, legal equality, free speech, and a growing private sector, are better for gays and everyone, is anti-gay.  If they can’t develop competences to assess multiple pro gay approaches, including ones beyond their own collective intelligence or imagination, they should change their name to reflect this.”

Undoubtedly, Mr. Major’s position will just relegate him in the eyes of the Left as a gay equivalent of an “Uncle Tom.”

Three strikes: The Left are out… or at least would be if doublethink wasn’t so ingrained into their thinking.

All three of these human being refused to be denigrated into stereotypes, who only wish to advance a narrow agenda the purports to benefit only one aspect of them as a human being.  In effect, the Left considers them not complete human beings, but wholly defines them by their who they are sexually attracted to. Regardless of whether they are Republican, Democrat, or third party, they will be crushed for dissenting.

The true enemies of gays and lesbians are the intolerant Left.  Even the religious right, the de facto boogie-man of the Left, will treat gays and lesbians as individuals.  It is the Progressive Left that denigrates people into classifications and condemns them as evil incarnate if they dare stray from Progressive orthodoxy.

Is it really so much to ask that individuals be treated as individuals?

This entry was posted in Elections, Progressives and tagged Kyriarchy, Social Justice. Bookmark the permalink.