Yet another mis-educated elitist and Marxist, this time a student attending Harvard, has declared that freedom is oppression and that “Academic Justice” should trump “Academic Freedom.”  She writes in the Harvard Crimson:

“If our university community opposes racism, sexism, and heterosexism, why should we put up with research that counters our goals simply in the name of ‘academic freedom’?

“Instead, I would like to propose a more rigorous standard: one of ‘academic justice.’ When an academic community observes research promoting or justifying oppression, it should ensure that this research does not continue.”

This, of course is not surprising.  The entire impetus of the rabid Left is to destroy society so that they may build a utopia in its place.  The old ways are just defined to be “oppression,” and thus opposition to this “oppression” is defined as being for “justice” and against “oppression” regardless of how unjust or oppressive the means of overthrowing society or the ends they wish to establish. 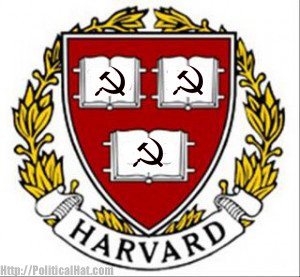 It is also another demonstration of thy hypocrisy of “tolerance” as championed by the Left.  They demand “tolerance” when it is their views, beliefs, or behavior they want heard or accepted.  However, this is only used as an excuse and tool to push their worldview on others.  As Robert Stacy McCain points out:

“During the early years of the Cold War, as William F. Buckley Jr. documented in God and Man at Yale (1951), elite universities used the “superstition” of academic freedom to protect faculty who, if not objectively pro-Soviet, at least were decidedly biased against Christianity, economic freedom and American patriotism.”

Once they have gained the power, they will silence opposition hypocritically under the claim of “tolerance” since they define their opposition as being “intolerance” and thus define opposition to those view to be “tolerance” quite regardless of the actual meaning of the word!  As Robert Stacy McCain astutely noted, this is just the underlying ideology of the neo-Marxist left and can be readily summed up by the words of Herbert Marcuse:

That Harvard Marxist even gives it all away when she writes:

“[D]iscourse about ‘academic freedom’ obscures what should fundamentally be a political argument.”

Therein lies the entire problem with Leftists in academia.  It isn’t about discovering the truth, it is about declaring the truth and then using academia as a political tool to implement and enforce it.

Is academia becoming MiniTru?  The sad truth of the matter is that Orwell’s “Ministry of Truth” was inspired by the Senate House of the University of London, which during WWII was co-opted by pro-Stalinist propagandists.