A man who came to California illegally from Mexico has been granted the right to practice law, despite the fact that “under federal law, no law firm, business or public agency can legally hire him.” 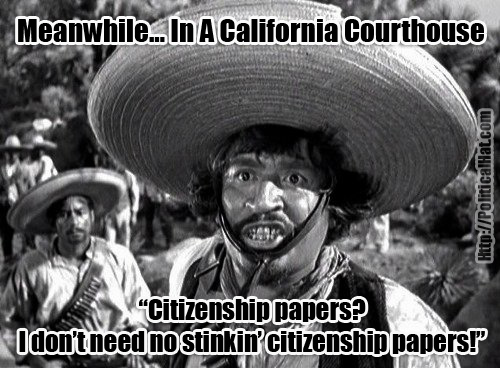 This is just another example of eliminating the distinction between citizens and non-citizens.  Already, the California Grand Soviet Legislature passed a bill to give non-citizens the right to sit on juries, and thus in judgment of others, including citizens.  Thankfully, that bill was vetoed… this time.  Aside from voting, for now at least, only the right to hold office serves to distinguish a citizen as a member of this body politic, society, and country. Unsurprisingly, then, he wants to run for Governor!

“The court went on to suggest that immigration status should not be considered any differently from, say, race or religion.

“‘We conclude that the fact that an undocumented immigrant’s presence in this country violates federal statutes is not itself a sufficient or persuasive basis for denying undocumented immigrants, as a class, admission to the state bar,’ [California Supreme Court] Chief Justice Tani Cantil-Sakauye wrote in her opinion.”

This is the Progressive view:  That “America” is just whoever, without restriction, happens to be wandering around in a certain geographical location at a certain time.  Our civic heritage is tosses aside, and Berthold Brecht’s humorous poem “The Solution” becomes the law of the land.