Posted on February 4, 2013 by The Political Hat

A recent gun show in Ohio was protested by a dozen or so by opponents of American’s 2nd Amendment civil liberties.  Included in their denunciations was the commonly spouted lie of illegal gun sales:

“‘We know that guns are being sold on the floor inside Hara Arena illegally’ said Jerome McCorry. ‘No background checks no identification of any kind.’

McCorry said ‘AK-47s and M16s are not gonna be used for hunting, they’re not going to be used to protect anybody. These are the weapons that are coming back and being used in mass murders and mass killings.'”

The irony, of course, in McCorry insisting that any gun is useless for self defense, is that McCorry is actually a convicted rapist, as revealed by Chad D. Baus at the Buckeye Firearms Association:

“Anti-Gun-Protestor Jerome McCorry” and “Rapist-and-Convicted-Felon Jerome McCorry” are one and the same person, and WHIO-TV and The Dayton Daily News have been treating this man as a legitimate voice of reason that should be considered in the debate over whether or not rape and other crime victims should be able to buy firearms in order to protect themselves from attack.

This should serve as a sound reminder that greatest thing a rapist fears, is a woman (or child) who can fight back with the one kind of weapons that serves as a true equalizer:  Guns. 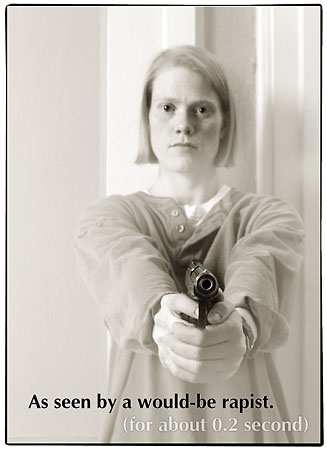