Trudeau: As Foretold In Prophesy

Over seven years ago, in the before-time known as “2014”, the Huffington Post, of all places, outright predicted that “Canada Will Become a Dictatorship Under Trudeau”.

“The leader of that party does what he wants, when he wants, and no one dares question him. Would a Prime Minister Trudeau arbitrarily whip the vote and outlaw certain moral questions? Could Prime Minister Trudeau be trusted to make decisions for the good of the country, not just for his personal self-worth? Would Trudeau call in the police to enforce his vision? Let’s hope we never have the opportunity to ask those questions.” 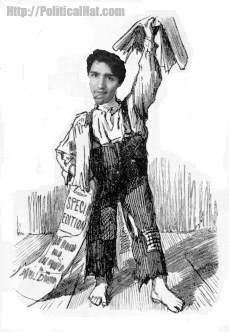 So, which Seal of the Apocalypse is this one now?

This entry was posted in Progressives and tagged derp, Leviathan, WTF. Bookmark the permalink.