The number of professional organizations that are going full woke seem to be increasing exponentially as off late. Perhaps one of the most frightening examples is an organization that represents the professionals in whose hands we place our very lives and the lives of our loved ones, namely doctors: The American Medical Association (AMA).

“Building on its June pledge to confront systemic racism and police brutality, the AMA has taken action to explicitly recognize racism as a public health threat and detailed a plan to mitigate its effects.

“‘The AMA recognizes that racism negatively impacts and exacerbates health inequities among historically marginalized communities. Without systemic and structural-level change, health inequities will continue to exist, and the overall health of the nation will suffer,’ said AMA Board Member Willarda V. Edwards, MD, MBA.

“‘As physicians and leaders in medicine, we are committed to optimal health for all, and are working to ensure all people and communities reach their full health potential,’ Dr. Edwards said. “DDeclaring racism as an urgent public health threat is a step in the right direction toward advancing equity in medicine and public health, while creating pathways for truth, healing, and reconciliation.’” 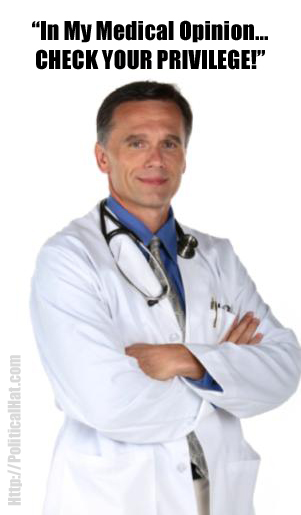 Their specific police points include:

Do racial slurs cause cancer? Does lack of Affirmative Action cause diabetes?

Note how they are using the term “inequity and equity”, and not equality. As we should all know by now, racial equity requires racial discrimination.

It is deeply ironic for these professional associations to basically declare their profession, and its practitioners, to be fundamentally racist (aside from the enlightened woke ones, of course), and then turn around and say that their racist professions and racist practitioners ought to be the ones to lecture us!

But how to do they purport to “cure” racism? Is there a surgery to remove racists parts of the brain or a vaccine we can inject into babies to prevent them from becoming racist?

Of course not, not even the AMA is Mengele-level crazy (yet). They insist that it is a social construct to a degree and say it is a “proxy for ancestry, genetics and biology in medical research”, even though it could at times be a useful proxy “for biology or genetics in medical education, research and clinical practice”. Yet they assume that it could never be a proxy for various “inequities” and that racism must be the disease and their woke medicine is the cure.   To them, thinking the wrong thing is a communicable disease that must be stamped out—this is a hallmark medical view of totalitarian regimes towards political enemies. It is also the hallmark of the quest for more funding for “research that promoted antiracist strategies to mitigate algorithmic bias”.

Their medical diagnosis is “prioritizing equity”. They declare that “race is a social construct” that can never be used as a “proxy” for “biology or genetics”, while declaring that it could never be a proxy for social outcomes—and thus differences in race being a real thing with real effect. They literally say that race is a social construct that shouldn’t be used in medicine while at the same time saying that “race” can influence health outcomes; doublethink is another hallmark of totalitarian regimes.

They also push a “false dilemma” fallacy by saying that you are either a racist who says race is real, essentialist, and determinative, or you fight against systemic racism by championing “equity”. That they mix in reasonable scientific and medical elements with their ideological worldview is both effective and dangerous, as can be seen in this little “critical conversation on approaches to dismantling race-based medicine” [italics mine]:

As Erick Erickson said “you will be made to care”; now being made to care is doctors’ orders.

This entry was posted in Healthcare, Progressives and tagged Science, Social Justice. Bookmark the permalink.

One Response to Anti-Racism Infects The American Medical Association