The Masterpiece Cakeshop, after winning the Masterpiece Cakeshop v. Colorado Civil Rights Commission case this year at the Supreme Court, discovered that the same biased Colorado Civil Rights Commission is going after the baker again, this time for not helping celebrate transgenderism as desired by a lawyer who sprung this on the very same day that the Supreme Court ruled.

“On the very day the Supreme Court decided to hear Masterpiece Cakeshop (June 26, 2017), a caller asked the bakery to make a cake with a pink inside and a blue outside, celebrating a gender transition from male to female. The shop politely declined, but Phillips believes that the same lawyer, on other occasions, requested that he create other custom cakes with messages that violate his faith — a cake celebrating Satan and a cake with Satanic symbols. The lawyer, a man identifying as a woman, goes by the name Autumn Scardina.

“Shortly after the Supreme Court gave Jack Phillips his win, denouncing the Colorado Civil Rights Commission for “religious hostility,” the state began to investigate Phillips again, finding probable cause that he had discriminated against the transgender lawyer who Phillips believes placed the call.” 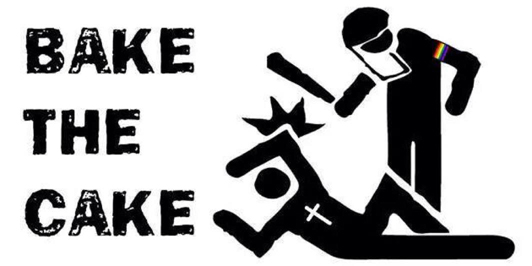 One of the justifications for going after Masterpiece Cakeshop was that the baker would bake wedding cakes for opposite-sex couples, and thus was discriminating based on some protected status. This is completely different since the baker, to your humble authors knowledge, ever baked a cake for anyone that celebrated a persons “gender” (being something separate and distinct from biological sex), as opposed to their biological sex such as with an announcement regarding a baby’s biological sex).

With all the persecuting of cake makers, et al., and such persecution going so far as to not just refuse to celebrate a wedding but to those who didn’t want to express an explicit political message concerning legislation, this new persecution is not surprising.

And there is a reason why the Colorado Civil Rights Commission continue to do this despite being slapped down by the Supreme Court: They have the wind against their backs. With all the decades of Gramcian Marching, they know that, in all likelyhood, their view will win out in the end and all they have to do is keep pushing. In contrast, those who oppose this can not do the same because it is their enemies who have framed the narrative and a failure can be disastrous if not fatal; this is why those who want to play by the other side’s “new rules” had better make sure that they are in an advantageous position in this world of “new rules” with more on their side than an impetus to “own” the other side or rage incoherently.

This entry was posted in Progressives and tagged Leviathan, Social Justice, tra. Bookmark the permalink.

2 Responses to Transing the Cake