One such flag is the Bennington Flag: 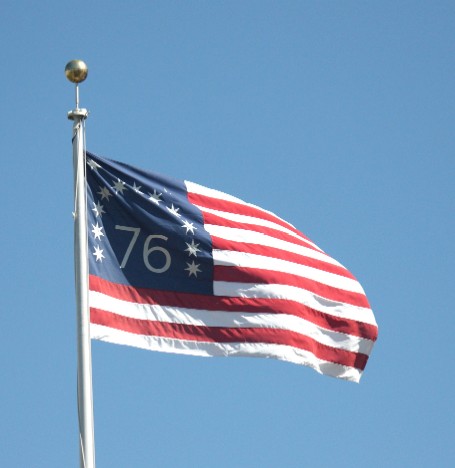 Like many Revolution era flags, the Bennington features 13 stars and 13 stripes, symbolic of the 13 American colonies that were in a state of rebellion against Great Britain. The Bennington version is easily identified by a large ’76’ in the canton, recalling the year 1776, when the Declaration of Independence was signed. Another distinctive feature of the Bennington flag is the arrangement of the 13 stripes, with white being outermost (rather than red being outermost as in the current flag). Also, its stars have seven points each (instead of the current five) and the blue canton is taller than on other flags, spanning nine instead of seven of the thirteen stripes.

The Bennington flag is a popular version of the American flag, and many historic flag dealers carry it. The large ’76’ makes it easily identifiable as banner from the American Revolution, evoking Spirit of ’76 nostalgia.