Infanticide and the Ignoble Savage

“Before Western Civilization showed up, it was a happy place. They had flowering meadows and rainbow skies, and rivers made of chocolate, where the children danced and laughed and played with gumdrop smiles.”

One of the most racist and denigrating tropes is that of the “noble savage”, the morally pure and utopian indigenous who was in harmony with nature and communed in a gender-free non-hierarchical collective of Progressive-idolized bliss. This fetishization has gotten to the point where the utopian nature of pre-Western Civilization tainted peoples is held as an absolute place of purity and anything offensive to modern minds is dismissed with the claim that other cultures, no matter how horrible they may seem, are just as valid, if not more so, than Western Civilizations. This ignores that “[t]he only way that incompatible things can be equal is if they are equally valueless“. This also ignores horrible tribal practices, which even if there were “survival of the fittest” reasons back in the day, hold no place in the modern world. 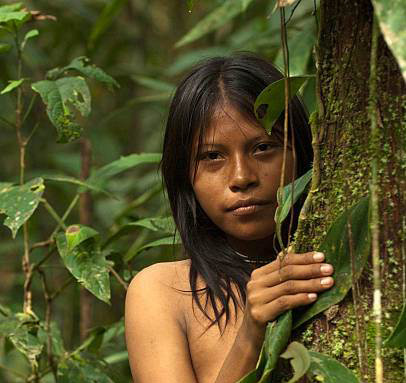 Sadly, it is Brazil that leads the way with treating native peoples as being outside the protection of the law, with infanticide and child murder so horrible that even the British NHS would be in shock. This is not an academic question, but one of, literally, life and death:

“‘Brazil is free to debate the issue academically in universities,’ says Maíra Barreto, a human rights lawyer who wrote her doctoral dissertation on the legal and bioethical questions raised by indigenous child killing. While the 1988 constitution introduces a conflict between the individual’s right to life and the right of indigenous peoples for self-determination, Barreto points out that the country has since ratified international treaties that seek to bridge relative and absolute approaches to indigenous rights.

“Márcia and Edson Suzuki walk with their adopted daughter, Hakani, on the Navajo reservation in Arizona where they now live and work as linguists, on March 7. (Jake Bacon for Foreign Policy)

“She is referring in part to the Indigenous and Tribal Peoples Convention, ratified by Brazil in 2002, which stipulates that indigenous peoples ‘shall have the right to retain their own customs and institutions, where these are not incompatible with fundamental rights defined by the national legal system and with internationally recognised human rights.’

“According to Barreto, under international law the way forward is obvious. ‘Certain cultural practices here are incompatible with human rights,’ she says. ‘They need to be thwarted. There’s no middle ground.’

“Barreto is a board member of Atini, an evangelical nonprofit that, on its website, describes itself as ‘internationally recognized for its pioneering work in defense of indigenous children’s rights.’ Founded in 2006 by Márcia Suzuki and her husband, Edson, missionaries who spent decades living among isolated indigenous groups, the organization operates a shelter in Brasília for indigenous parents who escape their communities in order to preserve the lives of their children who would otherwise have been slated for death. The organization also leads an awareness campaign surrounding indigenous child killing. Its members were advisors for the drafting of Muwaji’s Law.

“Their advocacy surrounding child killing began unintentionally, Suzuki says. In the late 1990s, she and her husband was living among the Suruwaha — a tribe with fewer than 200 members that first made contact with the outside world in the 1970s — in order to study their language. (Atini, according to the Suzukis, means ‘voice’ in the Suruwaha language.) Some critics say the couple was also there to proselytize.

“The tribe had long practiced both suicide and child killing. The former is an essential part of its cultural tradition and is considered a spiritually desirable death, while the latter has served as a form of population control.

“At one point during the Suzukis stay with the Suruwaha, the tribe apparently decided that two children who did not appear to be developing properly should die. The children’s parents committed suicide rather than kill the two. The tribe then buried the children alive anyway, as was the custom, Suzuki says. One, a girl named Hakani, survived the ordeal but was subsequently left to die by starvation. Her older brother kept her alive for a few years, smuggling her scraps of food, before eventually depositing her at the Suzukis’ feet.

“‘We got in touch with Funasa by radio,’ Suzuki says, referring to the government agency that oversaw health care in indigenous territories at the time. ‘We told them, “There’s a kid here who’s dying.”‘ A month went by without the health service retrieving the young girl. ‘They would say, “This is really complicated. To take the child out of there would cause her to lose her culture,”‘ Suzuki recalls. ‘And I’d say, “Either she loses her culture or she dies.”‘

“In 2000, the Suzukis decided to take Hakani, then 5 years old, for treatment themselves. After a long boat ride, they took a chartered flight to Porto Velho, the capital of the state of Rondônia in northern Brazil. There, she was diagnosed with hypothyroidism, a treatable condition. The Suzukis nursed her back to health and then attempted to return her to her tribe. ‘We wanted to show them that she was not cursed,’ Suzuki says. ‘But nobody wanted her.’ With Hakani’s parents gone, ‘nobody wanted to take care of her.’ So the Suzukis chose to adopt her.

“The evangelical missionaries who helped Kanhu and her family move to Brasília, the capital of Brazil, have since spearheaded a media and lobbying campaign to crack down on child killing. Their efforts have culminated in a controversial bill aimed at eradicating the practice, which won overwhelming approval in a 2015 vote by the Chamber of Deputies, the lower house of Brazil’s National Congress, and is currently under consideration in the Federal Senate, its upper house.

“But what may seem an overdue safeguard has drawn widespread condemnation from academics and indigenous rights groups in the country. The Brazilian Association of Anthropology, in an open letter published on its website, has called the bill an attempt to put indigenous peoples ‘in the permanent condition of defendants before a tribunal tasked with determining their degree of savagery.’

“The controversy over child killing has raised a fundamental question for Brazil — a vast country that is home to hundreds of protected tribes, many living in varying degrees of isolation: To what extent should the state interfere with customs that seem inhumane to the outside world but that indigenous peoples developed long ago as a means to ensure group survival in an unforgiving environment?”

The problem is that indigenous peoples don’t need these customs to survive anymore because that little thing known as Western Civilization has invented ways to make such inhumane measures needless and their practice simply a practice in inhumanity.

To say a child’s life is worth sacrificing because not being able to grow up in a culture where slaughtering children is normalized is somehow a fate worse than death is beyond the pale of consideration.

Yet some are so hellbent on seeing these indigenous peoples not as people, but as mere lower animals to be kept in a wild animal park to be gawked at from afar and kept as pets to tickle the fancy of the Leftist elite who wax poetically about their little noble savages. This is not an isolated case.

Thankfully, some people are standing up for the rights of indigenous children who can not stand up for themselves.

“[E]fforts have culminated in a controversial bill aimed at eradicating the practice, which won overwhelming approval in a 2015 vote by the Chamber of Deputies, the lower house of Brazil’s National Congress, and is currently under consideration in the Federal Senate, its upper house.

“But what may seem an overdue safeguard has drawn widespread condemnation from academics and indigenous rights groups in the country. The Brazilian Association of Anthropology, in an open letter published on its website, has called the bill an attempt to put indigenous peoples ‘in the permanent condition of defendants before a tribunal tasked with determining their degree of savagery.’

“The controversy over child killing has raised a fundamental question for Brazil — a vast country that is home to hundreds of protected tribes, many living in varying degrees of isolation: To what extent should the state interfere with customs that seem inhumane to the outside world but that indigenous peoples developed long ago as a means to ensure group survival in an unforgiving environment?”

That’s the thing, though. These practices are no longer necessary to “ensure group survival”. The blessings of the modern world have mad such things irrelevant. Only an insane obsession with treating human beings as zoological specimens could oppose that.

So, what does this bill do?

“The bill intended to crack down on the practice is informally known as ‘Muwaji’s Law,’ after an indigenous woman who rejected her community’s expectation that she kill her disabled daughter in 2005. If the bill passes the Senate, it will be tacked on as an amendment to the Indian Statute and require the government agencies that oversee indigenous communities to take a series of proactive measures. One will be the creation of an up-to-date registry of certain pregnant women so that the government can keep an eye on those (such as single mothers or women carrying twins) whose newborns might be targeted for death by their tribes. Another measure will require that the public prosecutor’s office be notified immediately of reports of human rights violations committed against newborns or any other stigmatized members of indigenous communities, including the elderly. The amendment also stipulates that any citizen who learns that an indigenous person’s life or safety is at risk but does not report it to the authorities will ‘be penalized under the applicable laws.’

“In 2007, the bill was introduced by then-congressman Henrique Afonso, a member of Brazil’s evangelical caucus and the then-ruling Workers’ Party. It immediately created tensions between those who champion universal human rights, which prioritize the individual, and those who support cultural relativism, which favors the freedom of communities to organize themselves according to their own moral codes.”

The ironic thing about “cultural relativism” is that it excludes Western Civilization and seeks to oppose it. Oddly enough, the Identitarians of the White/Western vein are simply trying to remove this contradiction from the Leftist worldview.

Rather then carve out a niche for oneself, one ought to be free to condemn the savagery of an ignoble sort.

This entry was posted in Progressives and tagged DOOM, RIP, Social Justice. Bookmark the permalink.

3 Responses to Infanticide and the Ignoble Savage