Posted on December 1, 2017 by The Political Hat

The Guardian, a British newspaper that has shifted from more traditional hard-Left pro-Communist fare towards outright Social Justice Warrior mode, decided to give everyone a lesson on two icky “right wing” German political parties…

“Adolf Hitler only joined the Nazis after being rejected by another political party, a leading historian has learned.

“Thomas Weber, a professor of history at the University of Aberdeen, unearthed a previously unpublished document that reveals that in 1919 the newly formed German Socialist party shunned Hitler, telling him that it did not want him in the party or writing for its paper.

“Weber said that history would have taken a different path if his membership had been accepted. Although also far-right, the German Socialist party was at the time bigger and more successful than the Nazi party. Hitler might have settled for a more minor role and would therefore ‘have been unlikely to ever come to power’, Weber added.” 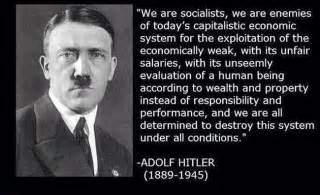 Now-a-days it has become common to ignore the fact that “Nazi” was slang for the NSDAP (Nationalsozialistische Deutsche Arbeiterpartei, AKA the “National Socialist German Workers Party”). But to then declare the German Socialist Party (Deutschsozialistische Partei, or DSP) a “far right” group but begs the question: Does the Guardian believe that socialism is just too “right wing” for their tastes?

At this point the re-animated corpse of V. I. Lenin or Mao Zedong would be called right wing Nazis by the modern looney Left!

This entry was posted in Progressives and tagged derp, FacePalm, FAIL. Bookmark the permalink.

One Response to Peak Guardian: Socialism is Far Right Ideologically