In Praise of Moloch

One of the greatest lies of the pro-abortion Left is that they are “personally” against abortion, but believe in “choice” based on the “right to privacy” between a doctor and a pregnant woman—that the government shouldn’t inject its opinion into that realm. 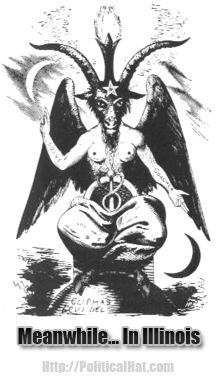 How then, does one square that circle with the following news that Illinois is compelling doctors to wax poetically over the “benefits” of abortion?

“Illinois compels doctors to counsel patients about the “benefits” of all legal medical procedures–the prime target is pro-life doctors about abortion, but it is not limited to that–and if unwilling to do the deed, to become complicity by helping patient find a doctor who will.

“First, the amended conscience law pretends to protect conscience, but requires counseling on benefits of legal procedures regardless of conscience beliefs. From Public Act 099-0690 … :

“‘Nothing in this Act shall relieve a physician from any duty, which may exist under any laws concerning current standards, of normal medical practice or care practices and procedures, to inform his or her patient of the patient’s condition, prognosis, legal treatment options, and risks and benefits of treatment options, provided, however, that such physician shall be under no duty to perform, assist, counsel, suggest, recommend, refer or participate in any way in any form of practice or health care service that is contrary to his or her conscience.’

“This means that if a woman is told she is pregnant, the doctor must counsel on the abortion option. It would require a doctor to counsel on the benefits of sex reassignment to their patients with gender dysphoria. (The ACLU has already brought such a lawsuit against a Catholic hospital for refusing to permit sex change surgeries.)

“It would also mean, were assisted suicide legalized, a doctor would have to tell a terminally ill patient about the option of receiving a lethal overdose.”

This is indicative of the usual bait & switch tactic of the Left. They first convince people of their position by appealing to the values of their opponents. Once their position is normalized, they substitute their own argument while dismantling the argument that they used. In this case, it was “right of privacy” to restrain the state, followed by inventing new justifications while now denigrating the argument that they had used since to make sure it isn’t used against them.

One Response to In Praise of Moloch