Cleanliness is Next to Sharia

We’ve seen public schools teach the Islamic Shahada, encourage “Muslim” clothing be worn, or circulating the Koran.  Now, they seem to be taking all that for granted…

“The father of a second-grader in the Cecil S. Collins School was alarmed to see references to hijabs and thawbs – clothing worn by religious Muslims – and a quote from the Quran included in a health and hygiene worksheet given to his daughter.

“The worksheet included instruction about cleanliness and neatness not just of shoes and clothing but of a student’s hijab and thawb, an ankle-length robe-like garment worn by Muslim men, according to pictures sent to the Asbury Park Press by Barnegat father Chris Sharpe.

“The sheet also included a reference to a Quran quote that read ‘Allah loves those who make themselves clean and pure.'” 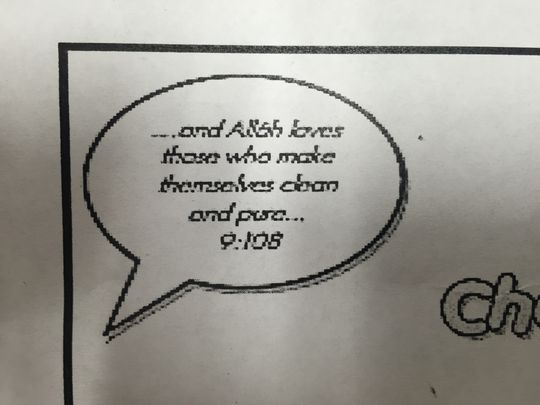 How did the school respond to this?

By pointing out the incompetence of the teacher.

“On Wednesday morning, Sharpe said Barnegat school officials apologized to parents and explained that it was a simple mistake of a teacher quickly downloading health worksheets online and not carefully reviewing their content.”

One Response to Cleanliness is Next to Sharia