And Public Schools are His Prophet

While Christianity has been purged from the public schools, the vacuum is being increasingly filled by Islam.  Middle Schoolers in Tennessee were taught to write the Shahada, the Islamic statement of faith.  This was not an isolated incident:

“According to parents, students were not informed of the translation or of the specific meaning of the Arabic text the students were being asked to copy. In addition, parents confirm that female students were invited to don Muslim apparel and subsequently were photographed in costume by the teacher. (Reportedly, an administrator has since disposed of the photos.)

“A post-assignment emergency meeting held with the teacher, a parent, and schools administration yielded the following additional information: 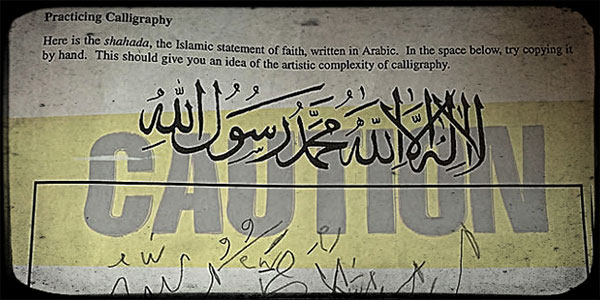 Would this be allowed if the students were being taught the first fundamental step in converting to Christianity, or even any other religion?

Apparently the school doesn’t want to talk about it, because they are closing early for Christmas Winter break because the “tone” of the outrage from people who have a problem with the school teaching kids to recite a statement of Islamic faith…

It just goes to prove that some people still think “separation of church and state” is the law of the land… but only Christian churches.

This entry was posted in Education, Progressives and tagged Leviathan. Bookmark the permalink.