Brexit and its Aftermath: The Embracing of Sovereignty

By a 52% to 48% vote, the United Kingdom has voted in a referendum to leave the European Union in the Brexit (British Exit) vote.  Despite the scare tactics of the Remain campaign and despite, or perhaps because of, the accusations that anyone who was pro-Brexit were racist monsters, the Leave campaign was able to win.

This divide is not along the traditional Tory/Labour lines.  Indeed, the Leave campaign won many Labour strongholds, as well as Wales.  Only the Nationalist (pro-Republic of Ireland) areas of Northern Ireland, the anti-English Scots, and emeriate-in-waiting that is London (as well as a chunk of central south England), overwhelmingly voted to stay in the European Union. 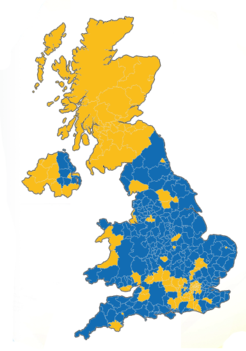 This divide was of the hoi polloi who have been increasingly pushed aside by the elites, and the elites who wish for the U.K. to fade away so that a hollow and nebulous “Europe” can arise in all its cosmopolitan splendor, complete with imported replacement population.

In celebration, UKIP (soon to be former) M.E.P. Nigel Farage called for a bank holiday to celebrate the U.K.’s independence from Europe.  Some are going further and embracing Imperial measures over the Metric System.

The European Union, not used to being able to boss people around without their consent, have been throwing a massive temper tantrum, including threatening to drop English as an official language of the European Union, which is a bit ironic since English is the de facto lingua franca of business and science globally.  The European Parliament, which is little more than a rubber-stamp for the elites, booed a triumphant Nigel Farage:

(Soon to be former) M.E.P. Daniel Hannan has to deal with worse as a clearly unhinged Christine Amanpour for nine minutes:

The European Union elite, in response to Brexit, have decided to double-down.  German foreign minister has gone so far as to declare that they “won’t let anyone take Europe from us“.  The antipathy towards democracy and the little people daring to have a say, going so far as to declare that “the British have violated the rules. It is not the EU philosophy that the crowd can decide his fate“.

The response to Brexit just sped up the inevitable end to what the Eurocrats have been pushing for: A combination of French 3rd Empire and a Viertes Reich (4th Reich).  The European Union elite are moving to deny any country in Europe to ever have a chance to leave, with a total surrender of sovereignty by transferring their armies, economic systems, and border controls to the European Union.

The upheaval was not limited to the continent, with anti-Brexit Prime Minister David Cameron announcing his resignation.  While there was much expectation that pro-Brexit M.P. and former London Mayor Boris Johnson would run, he has bowed out, with the two main candidates to replace Cameron as Tory leader and Prime Minister being pro-Brexit Michael Gove and anti-Brexit Theresa May.

One of the benefits of leaving the E.U. is that the U.K. can now make its own international trade deals, with a strong Anglo-spheric trade bloc being a distinct possibility.  Such a trade bloc would rival the European Union.  The Anglo-spheric pull is so great, that there is even a call for Hong Kong to pull a “Brexit” of its own and return control to the U.K.

Of course, the U.K. isn’t the only country where anti-E.U. feelings exist.  Many parties throughout Europe are planning on campaigning on holding referenda similar to Brexit, such with Marine Le Pen’s National Front party in France and Geert Wilders’ Dutch Party for Freedom… amongst many others.

Separatist feelings are not limited to the continent.  Nicola Sturgeon, the Scottish National Party leader and 1st Minister of the Holyrood (Scotland’s devolved parliament).  Is calling for another referendum on Scottish independence.  Her hopes is to declare independence before the Article 50 negotiations between the U.K. and the E.U. are concluded, thus maintaining Scotland as part of the E.U.  Such wishful thinking has been dashed with the E.U. saying all of the U.K. was leaving, and that Scotland would have to apply as a new member of the E.U.… which is problematic because Spain is inclined to deny Scotland membership in order to send a signal against other separatist movements, such as Spain faces in Catalonia.

More plausible from a membership side, it Northern Ireland voting to join with the Republic of Ireland, who is already a member of the E.U.  However, Northern Ireland did not have such a widespread vote for Leave as Scotland (where Remain won in all constituencies).  Regions in Northern Ireland was divided between Leave and Remain, with a loose but present correlation between Catholic “Nationalists” and Protestant “Unionists.”  Northern Ireland’s Assembly has a Unionist majority, so a referendum would be unlikely while the Unionists hold a majority.  Even then, a vote to join the Republic of Ireland might cause sectarian violence to flair up again, abet with the Protestant militias taking up the position held by the IRA.

Overall, there is much uncertainty in exactly how the aftermath of Brexit will shake-out, but one thing is for sure: The British will decide their part for themselves.

This entry was posted in Elections and tagged Europe, Leviathan, UKIP. Bookmark the permalink.

One Response to Brexit and its Aftermath: The Embracing of Sovereignty