Would you serve a pregnant woman alcohol?  If you are a New York City bartended, you’d better make it a double because the woman is drinking for two:

“A pregnant woman shows up at a New York City bar and wants to go in and order a drink despite health warnings against consuming alcohol while expecting. Should the tavern serve her?

“It’s against the law to refuse, under city Human Rights Commission guidelines released Friday. They center on expansive protections for pregnant workers but also say mothers-to-be can’t be kept out of bars or denied alcoholic drinks just because they’re expecting.

“‘Judgments and stereotypes about how pregnant individuals should behave, their physical capabilities and what is or is not healthy for a fetus are pervasive in our society and cannot be used as pretext for unlawful discriminatory decisions’ in public venues, the new guidelines say.”

This seems an area that both Progressives and libertines (not real libertarians) endorse: Forcing businesses and workers to surrender any moral agency, and to cater to their every whim.

What ever happened to the “right to refuse service”?  This isn’t racial or even gender discrimination. Unlike with cakes, flowers, &c. for Gay couples, there is literally an innocent life involved. 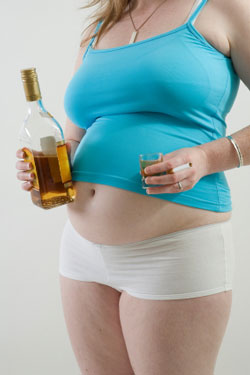 Make it a double, I'm drinking for two! *hic*

A bartender—anyone—should not be forced to surrender their own moral agency and just follow orders to harm another innocent human being and a prerequisite to holding a job.

The irony is that the law that this new rule is based on was about protecting pregnant women and mandating that they be treated differently and deferently, while this new rule requires the exact opposite.

This entry was posted in Healthcare, Progressives and tagged Leviathan, War on Women, WTF. Bookmark the permalink.

2 Responses to Drinking for Two