One would expect, out of all the major and minor parties in the United States of America, that the Libertarian Party would be the one that would support businesses in their right to refuse service if they find such service to be morally repugnant, based on the idea that the state shouldn’t coerce people as such.

One, however, would be wrong.  Turns out Gary Johnson has a bit of a Statist streak, as Benny Huang over at Freedom Daily notes:

“If you’re like me you’re probably searching for a third party candidate in the wake of Donald Trump’s clinching of the GOP nomination. For those of you considering the Libertarian Party (LP), I hope you’ll reconsider.

“The party’s current frontrunner, former New Mexico Governor Gary Johnson, doesn’t seem to understand this liberty thing. He thinks it means drugs and abortion but should you decide that you don’t want to engage in a business transaction he wants the government to coerce you. The party’s other candidates aren’t quite as extreme in their statism though none of them will make an unqualified stand for your Thirteenth Amendment right not to be held in involuntary servitude—which is exactly what private sector nondiscrimination laws are.

“Johnson is so enamored with the concept of private sector nondiscrimination laws that he wants to force Jewish bakers to make a Nazi wedding cakes. Yes, really. Contrary to the battle cry of his party, ‘Minimum government, maximum freedom,’ Johnson thinks the government should mandate that party A do business with party B. I don’t. My philosophy is that both ends of any economic transaction should be voluntary. That is not, by the way, a return to Jim Crow. Jim Crow was also a statist monstrosity which prohibited businesses from serving whom they wished. Big difference.”

While Mr. Huang is making a salient point about the Libertarian Parties hypocrisy, it also misses another point: There is a difference between refusing to sell some standard widget to someone just because of their race; and refusing to participate or personal creative abilities to promote and endorse a moral message.

That former New Mexico Governor Gary Johnson has gone so far as to state that the government may void your free speech rights, just so that someone else can get what they want, is just proof that many “libertarians” are libertines who only care about getting what they can get.

It also demonstrates that the “right” of a customer to get whatever they want requires that the business, and the people who work for it, to surrender all moral agency and just follow orders, as is the case with the city of New York forcing bars and bartenders to serve pregnant women a drink. 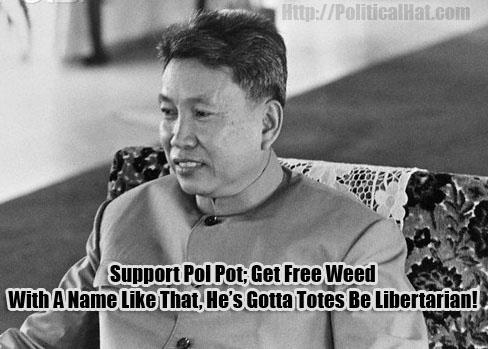 To a large degree, this is the end result of John Stewart Mills’ opinions on the squares who wanted to harsh his mellow.  Libertines want not only the right to do what they want, but the “right” to compel you to do so.

Mills whined about the “inclination to stretch unduly the powers of society over the individual, both by the force of opinion and even by that of legislation.”*  He was, in fact, complaining not just about coercion by the state, but by the opinion of society in effect “harshing his mellow.”

The irony here is that Gov. Johnson is endorsing using the “powers of society over the individual” via “coercion by the state.

Libertarians have become what they ostensibly declare they hate.

This entry was posted in Elections, Uncategorized and tagged derp, Leviathan, Social Justice. Bookmark the permalink.

2 Responses to The Unlibertarian Libertarians