The focus this time: Destroying the suburbs; Creating new ghettos.

The Dept. of Housing and Urban Development under Obama wants to require racial quotas for cities, towns, and suburbs to achieve “racial balance” and “equality”:

“But former elected officials Ken Blackwell and Rick Manning argue the ‘AFFH rule seeks to radically reinvent local zoning laws in the United States – reengineering America’s neighborhoods based on racial and ethnic quotas. Under the rule’s assessment tool, local governments are required to “identify neighborhoods or areas in the jurisdiction and region where racial/ethnic groups are segregated.”‘”

They get away with this through the “disparate impact”

“HUD clearly aims to glean mountains of demographic data, and you can bet your back yard that it won’t go to waste in the hands of the social justice bureaucracy. That data will be presented as evidence of the disparate impact of local housing policies, opening the door to federal intervention.”

Thus a community can be found guilty of discriminating by treating people equally, and consequently be forced to discriminate in order to provide equal opportunity. 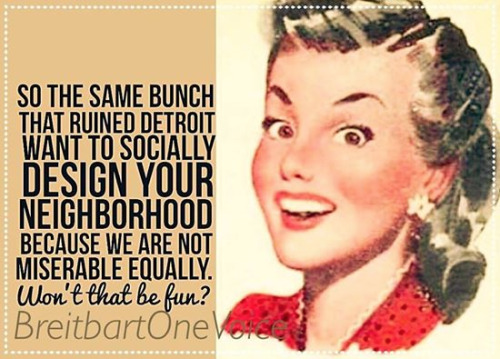 The Obama administration can force this on people because local governments and states are addicted and dependent on Federal money.

” When HUD blasted the city’s approach to revamping the Section 8 voucher program in Dubuque, local officials entered into a compliance agreement with HUD. That agreement required the city to abandon its system for treating local applicants preferentially and expand its voucher program to reach out to minority populations. Progress had to be reported regularly to the federal government. Failing to do so would mean losing out on HUD money.

“In fiscal 2015, the City of Dubuque counted on HUD for $6.1 million, including $1.3 million in Community Development Block Grants.

“Trying to replace a $6 million hole in a budget the size of Dubuque’s would mean significant cuts to programs and services. This is the rock and hard-place bookends between which the federal government places the city.

“In the real world, we would call that blackmail. In government, it’s business as usual.”

As unlikely as it may be, outside of massive overhaul of the law, and of the Supreme Court, the only way to fight this is to reject HUD:

“First, find out if your local government accepts grants from the Department of Housing and Urban Development.

“Second, if your city, town, suburb, or county does take HUD money, press your local leaders to refuse all future HUD grants. Otherwise your hometown will fall under the federal boot—at least it will if Hillary Clinton wins in 2016. Only a Republican president would rescind Obama’s AFFH rule. So if a Democrat wins the presidency in 2016, Obama will have succeeded in bringing local government in the United States under the effective control of the feds.”