Posted on February 4, 2016 by The Political Hat

For yet another year, the annual “White Privilege Conference” will occur, where people come together and figure out how to better blame Whitey for everything wrong in the world.  Also, intersectionality:

“The 2016 conference will feature a variety of speakers and numerous breakout sessions, all of which come at an additional charge. On two of the four days, participants will have the opportunity to spend six hours attending workshops of their choosing, including several tailored for middle-school and high-school students in attendance. More than 20 workshops will be featured at the event, covering topics of sex, race, and gender.”

And coming together to gripe about Whitey doesn’t come cheap:

“The student registration fee is $200, plus an additional $100 for various ‘one day institutes,’ and another $40 for a ‘community dinner,’ a sum of $340. However, some universities are offering to front the cost and cover hotel and transportation fees.

“For instance, Miami University (MU) of Ohio is covering more than half the cost and charging students a flat fee of only $60, potentially $240 less than the total expense of the conference. In addition, a document obtained by Campus Reform shows the university will also be covering the ‘hotel fee and transportation,’ which would theoretically put MU’s total expenditure for the conference well beyond $240 per student.”

Aside from the usual suspects of academia and organizations like “Center for the Study of White American Culture,” the “Host Team” for the 17th White Privilege Conference heavily includes some Christian organizations with a socialist bent, specifically, the Quakers (i.e. The Society of Friends), such as the Friends General Conference (FGC), American Friends Service Committee, Friends Council on Education, Germantown Friends School, and the Philadelphia Yearly Meeting of the Religious society of Friends. 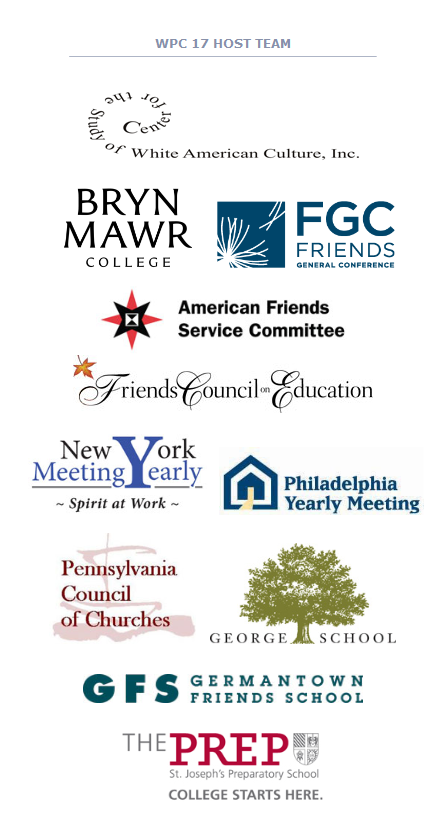 The question arises: Do Quakers share the hatred for White people, or are they just virtue-signallilng useful dups?

A provisional schedule of their hate-mongering can be seen below: