Posted on February 5, 2016 by The Political Hat

“Homophobia” has been, yet again, redefined such that one is declared to be a “homophobe” unless they enthusiastically celebrate and nurture sexual relations between those of the same-sex!

The broader definition that is commonly used is that homophobia is “defined as the irrational fear of homosexuals, homosexuality, or any behavior, belief, or others which does not conform to rigid sex role stereotypes. It is this fear that enforces sexism as well as heterosexism.” 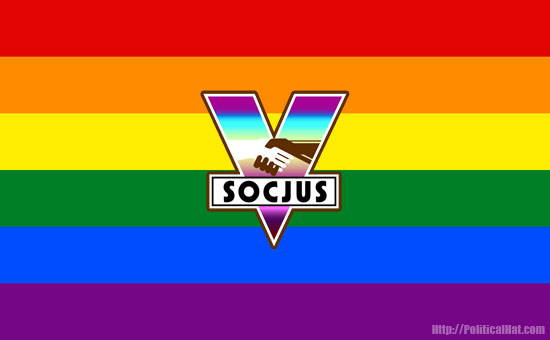 Though it is obvious to the un-indoctrinated, the double standard is but #doublethink incarnate: A straight person who thinks that, to them, same-sex relations is unappealing and a turn off is “irrational”, is expressing an “irrational fear”; in contrast, it is taken as a given that someone who is homosexual naturally finds coitus or other different-sex sex acts to be disgusting, and it is considered “H8” to suggest they feel otherwise.

But even if you not only tolerate, but even accept, homosexuality, you are still “homophobe” according tot he “Riddle Homophobica Scale”.  The scale goes from mega-homophobic 1 (Repulsion), to super-supporter 8 (Nurturance).  Affirmation becomes “mandatory”, and straight people must continuously do penance to be saved from the original sin of “homophobia”.  The scale goes beyond mere support.  You must admire people because of who they sleep with!  You must appreaciate the glory and wonder of two people of the same-sex getting it on!  You must nurture and spread the gospel, you evil breeder!!1!

The full “scale” can is described below:

In other words, they are demanding that everyone think as they think, or else we are abominably wicked, we are toads.

We will, then, be toads.

One Response to Accepting Homosexuality is Homophobic