With the global climate agreement agreed upon by a bunch of elitists that wasted far more CO2 than some small countries, the burden of sacrificing for Gaia falls squarely on the shoulders of the poor and elderly.

“The Paris climate change deal spells the beginning of the end for cooking and heating with gas, experts claimed yesterday.

“Within 15 years, British families may have to start phasing out gas cookers, fires and boilers if the UK is to meet new tougher targets aimed at halting rises in global temperature.” 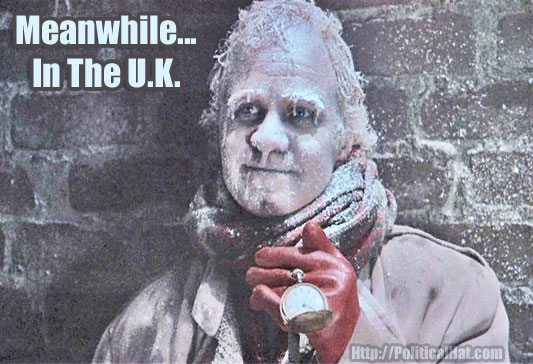 How are the poor and hungry going to keep themselves warm?  But buying prohibitively expensive alternatives that the rich elite don’t bother thinking twice about… if they think of it at all:

“The Government’s Committee on Climate Change is pressing for alternatives to boilers such as heat pumps – devices which extract warmth from the ground or air.

“It wants four million homes to be heated by such devices by 2030, despite each costing £12,000, with installations accelerating after that until gas plays a minimal role in heating and cooking in homes by 2050.”

How big of a disaster would this be?  Considering that even with their gas heaters, over 40,000 elderly are expected to die from the cold this Winter!  Caroline Abrahams, the director of the Age UK charity, said:

“It’s a shocking fact that this winter, one older person could die every seven minutes from the cold. Yet with just under one million older people living in fuel poverty, many simply cannot afford to heat their homes to a temperature high enough to keep warm and well. We are calling for the government to commit to improving the energy efficiency of homes across the country in order to provide a long-lasting solution to the scandal of fuel poverty and preventable winter deaths”

Banning the heating that many can barely afford, if they can afford it at all, and requiring alternatives that all but a handful can readily afford, does not solve this problem.  If anything it will result in a climate alarmist caused euthanasia for the U.K.’s elderly, abet a much cheaper one than the “Liverpool Care Pathway.”

This entry was posted in Progressives, Science and tagged Energy, Green, Leviathan. Bookmark the permalink.

One Response to Climate Change Euthanasia