Posted on December 9, 2015 by The Political Hat

The American Civil Liberties Union likes to pretend that it “wubs” civil liberties for American.  However, they only pretend when it is politically useful for them to do so.

Case in point: No fly lists.

The ACLU is suing against the use of “no fly lists”, considering prohibiting someone from using one particular form of transportation as unacceptable.  Indeed the arbitrary and capricious nature by which people can be added to a list, with no recourse to remove themselves from the list, is indeed noxious worthy of nothing but opposition. 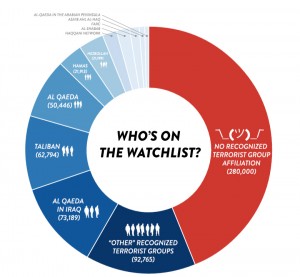 “There is no constitutional bar to reasonable regulation of guns, and the no-fly list could serve as one tool for it”

The ACLU is all for civil liberties, at least for some people.  This should come as no surprise from an organization that supported religious freedom laws to protect non-Christians from the equal application of the law, but opposes religious freedom to not subsidize someone else’s sex life.