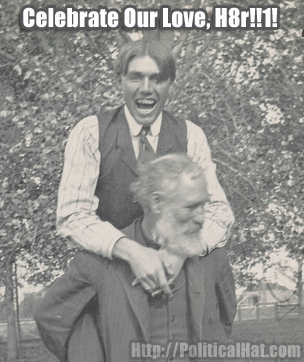 A father and his adopted son want to marry.

“If you asked Nino Esposito and his partner five years ago when they thought same-sex marriage would be legal, they’d say the day would never come.

“Prior to the Supreme Court’s legalization of same-sex marriage nationwide, many gay couples used adoption laws as a way to gain legal family ties in order to get benefits, as reported by CNN.

“This was the case for Esposito, a retired teacher, and his now adopted partner Roland ‘Drew’ Bosee, a former freelance and technical writer. The couple went through with the adoption in 2012 after 40 years of being together.

“The couple is now trying to reverse the adoption in order to get married, but a state court judge has rejected that request saying adoption annulments are generally limited to cases of fraud.”

The ACLU has already demanding that a same sex parent child marriage be allowed because clearly “some… are more equal than other” it would seem.

One Response to Marriage Equality – Father and Son