M.P. Jeremy Corbyn was overwhelmingly elected as leader of the U.K.’s Labour Party.  His love for Osama bin Laden and hatred for the United States is well known, but his picks for the “Shadow Cabinet” are demonstrating just how bats**t insane Labour has decided to become.

How crazy?  How about putting Agricultural policy in the hands of a militant Vegan, Kerry McCarthy:

“An outspoken critic of the meat industry, Ms McCarthy believes livestock farming contributes to world hunger by using crops as animal feed, rather than to feed humans.”

McCarthy even wants to treat eating meat and dairy the same as smoking and said:

“I really believe that meat should be treated in exactly the same way as tobacco, with public campaigns to stop people eating it. Progress on animal welfare is being made at EU level… but in the end it comes down to not eating meat or dairy.” 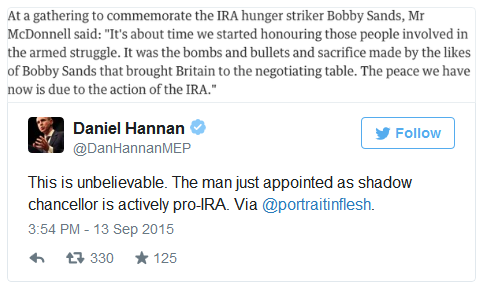 Yet again Monty Python has been prophetic:

The interesting thing is that the U.K. Independence Party came in second to Labour in a large number of seats.  With the Liberal Democrats being all but annihilated this past election, UKIP may well be positioned to take up as the official opposition (if not more than that) in 2020.

There’s a reason why old school socialism was rejected, even in Europe once-upon-a-time…

I don't mean to troll with these @jeremycorbyn memes, but they really are amusing. pic.twitter.com/cDHDeEdfF1

This entry was posted in Progressives and tagged Europe, FacePalm, Unions. Bookmark the permalink.