One Hundred and Fifty Years Ago: Juneteenth

Slavery was an African import antithetical to  the core values of the Anglo-American tradition.  On June 19th, 1865, the last slaves in the United States were told of their freedom by Union Major-General Gordon Granger, who read General Orders, № 3, to the people of Galveston. 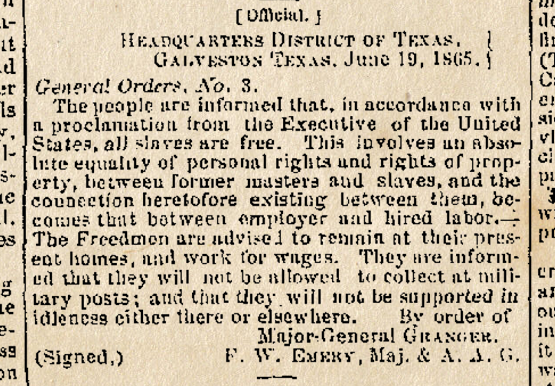 “The people of Texas are informed that, in accordance with a proclamation from the Executive of the United States, all slaves are free. This involves an absolute equality of personal rights and rights of property between former masters and slaves, and the connection heretofore existing between them becomes that between employer and hired labor. The freedmen are advised to remain quietly at their present homes and work for wages. They are informed that they will not be allowed to collect at military posts and that they will not be supported in idleness either there or elsewhere.”

The extinguishing of slavery deserves the celebration of anyone who values freedom.

This entry was posted in Uncategorized and tagged Democrats, GOP, Patriotism. Bookmark the permalink.