Rick Santorum, A Paragon of Tolerance

When Bruce Jenner, the soon to be transsexual, came out of the closet as a Christian and a conservative, many on the left flipped out and started hurling “transphobic” insults and otherwise venting pure distilled H8.

Who was it, then, that stood up and defended Bruce Jenner as a human being deserving of respect?  None other than Rick Santorum, who said:

“My responsibility as a human being is to love and accept everybody. Not to criticize people for who they are. I can criticize, and I do, for what people do, for their behavior. But as far as for who they are, you have to respect everybody, and these are obviously complex issues for businesses, for society, and I think we have to look at it in a way that is compassionate and respectful of everybody.” 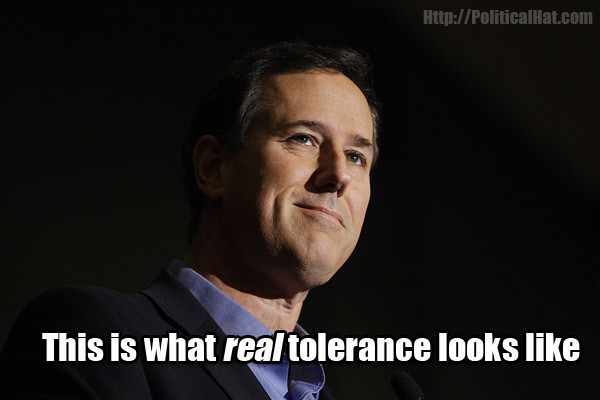 Unsurprisingly, rabid Leftist H8-mogers flipped out and attacked Rick Santorum, complete with purposefully insulting photos and reminding everyone that H8-mongering bully and all-around piece of [expletive deleted] Dan Savage was “tolerant” enough to equate Santorum with something that only Savage would love.

The loathsome and intolerant excuses for human beings (i.e. Wonkette) went so far as to belittle Santorum by falsely calling him a liar and claiming that he was apologizing for expressing true tolerance:

“Boy, Santorum sure stepped in a puddle of himself, didn’t he? It says something about the state of right-wing douchenozzlery in America when a presumed presidential candidate feels the need to make a public apology for being TOO NICE.”

It is intuitively obvious to the most casual observer that Santorum wasn’t apologizing for being tolerant, but rather demonstrating true tolerance!  One tolerates things they do not approve of and do not like.  Clearly this notion is alien to the H8-mongering idjits over at Wonkette.

This entry was posted in Progressives and tagged derp, GOP, Social Justice. Bookmark the permalink.

One Response to Rick Santorum, A Paragon of Tolerance