According to modern Feminists, there is nothing so empowering of woman than… having their genitals mutilated.

“We underwent several rites as part of our transition from girlhood to womanhood, the most significant being our excision operation – the reduction of the exposed clitoral hood, glans and labia minorae. My immediate experience was of pain and culture shock, while my eight year old sister felt nothing and was soon up and about with other young girls playing in the Bondo encampment. My initial fear – that I would never enjoy sex again and be scarred forever – turned into pride and amazement when I first held a mirror “down there”, saw a clean, smooth look”. 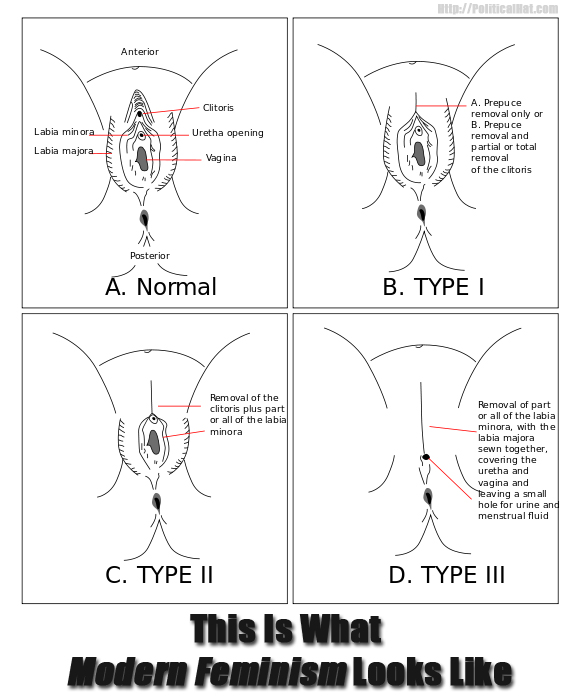 Of course, it isn’t just about women, but about how White people are evil hypocrites and oppressors:

“Yet, in recent years, all over the internet and in Western women’s magazines I see glossy advertisements of white women who have undergone what is now popularised as Female Genital Cosmetic Surgery (FGCS). Doctors, including gynecologists with no surgery background, can charge thousands of dollars for procedures very similar to what I underwent and which the World Health Organisation (WHO) classifies as Type II Mutilation. I do find this puzzling. African women have been berated for over thirty years now for “mutilating” our own and our daughters’ genitals. Medical practitioners are prohibited from performing these surgeries under clinical environments, even when requested by adult African women. But, white Australian girls as young as 14 and 11 can obtain “labiaplasty” underwritten by the National Health Service in local hospitals?”

Labiaplasty doesn’t hack off any part of the clitoris.

What this lunatic is whining about isn’t Female Genital Mutiliation.

The truth of the matter is that Female Genital Mutilation often involves far more than nicking a clitoral hood… but the removal of the clitoris itself in addition to surgical closure of much of the vagina.

Once, Feminists would have condemned such things, but hatred of such “Western values” has led them to celebrate anything that opposes those values… even if those values are far more anti-woman than Western Civilization has ever been.

But then, “Kyriarchy“, right?

This entry was posted in Progressives and tagged War on Women. Bookmark the permalink.