Innocence is No Excuse

A student at the University of Tulsa was banned from campus for a year?  What prompted the university to ban this student?  An entirely different person criticized people at the university. 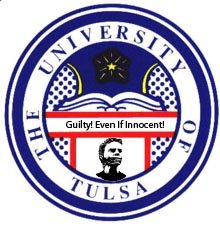 Despite being innocent of anything, the university declared that the student “not ‘avoid responsibility’ because someone else was responsible for the posts”.  Further:

“The sanctions included suspending his participation in certain courses and activities and even barring him from speaking about certain individuals.

“Less than two months before [the student] Barnett was set to graduate, [Senior Vice Provost Winona] Tanaka not only suspended him until at least 2016 but also permanently banned him from receiving a degree in his major even upon his re-enrollment.”

Surprisingly, the person whose Facebook comments cause Barnett to be punished was his male legal spouse.  It shouldn’t come as any surprise when even anti-gay bully icons like Dan Savage can be harassed and attacked.

Unsurprisingly, the university is threatening the student newspaper for daring to… report the facts.

Do not fool yourself that colleges are only opposed to “cishet” male White X-tians.  Colleges are quite willing to discriminate against Asians, and now it is clear that not even being a “married” same-sex couple is protection against the machinations of insane administrators.

As far as the gatekeepers of academia are concerned, you will be punished if they find it useful, even if you are innocent.

This entry was posted in Education and tagged Higher Ed. Bookmark the permalink.