Obamacare was a lie meant to trick fools?  All those who opposed this Frankenstein’s monster knew it.  The members of Congress who voted for it, on the other hand, were indeed snookered, and one of the chief liars has been caught repeatedly boasting of how he tricked them. The man in question?  Jonathan Gruber. 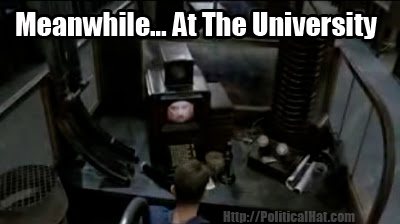 A quick summary to get everyone up to speed:

With all of these videos, with doubtlessly more to come, of Gruber openly boasting of the lie that is Obamacare, what other recourse is there but for those paragons of the truth known as INGSOC Universities to dispose of Gruber’s boastful admissions.

The University of Rhode Island pulled one such video. The University of Pennsylvania also pulled one of his videos from the 24th Annual Health Economics Conference.  However, the outcry was so great, that they have — at least for now — put it back up:

Here is a collection of the Gruber videos.  Better capture them before they too go down the memory hole.

This entry was posted in Healthcare, Progressives and tagged Democrats, Leviathan, Obamacare. Bookmark the permalink.