Posted on September 5, 2014 by The Political Hat 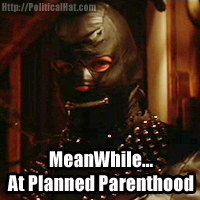 Planned Parenthood is all aflutter about rape.  Why, they take it so seriously, they slander a paraplegic in order to get their candidate elected Governor of Texas:

Of course there is some rape they are totes cool with:

“A Planned Parenthood counselor in Arizona intentionally miscoded a sexual assault as a consensual encounter to avoid the ‘hassle’ of reporting it to authorities, months before other victims came forward to stop an alleged 18-year-old serial sex predator, a police report reveals.”

And yes, this seems to be a habit of theirs.

Of course, below a certain age, they girls can’t legally consent to sex.  For these minors, Planned Parenthood fully teaches children abut “how to inflict pain and physical injuries under the caveat of ‘consent.’ That isn’t sex education; it’s grooming.”  Some of the advice?  Encouraging a 15 year old to let her boyfriend beat her with a horsewhip, play with nipple clamps,  as well as to peruse sex shops.  Undercover footage:

This entry was posted in Healthcare, Progressives and tagged Gender, Mood Music, War on Women. Bookmark the permalink.