Does the NBA Condone Genocide?

NBA star Dwight Howard  send out a very public tweet with the hashtag #FreePalestine, which is popular with the “Kill All Jews!!1!” crowd.

He quickly deleted it, but by then he received accolades from true purveyors of hatred: 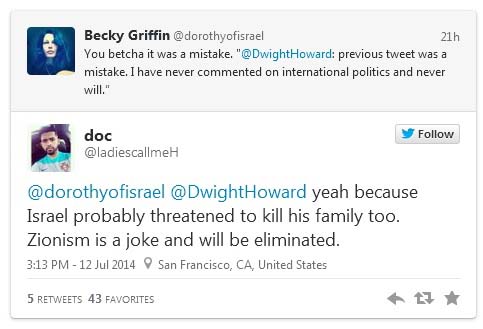 Considering that Sterling was banned from the NBA and forced to sell his team for a private utterance that was illegally recorded and thus a victim of a crime, then certainly a very public expression of support for genocidal terrorists would cause the NBA to speak out?

This entry was posted in Progressives, War & Terror and tagged FAIL. Bookmark the permalink.