When Maleness is Considered a Pathology

Is the problem with society due to men being men, and boys aspiring to that?  According to feminist activists, that answer is YES, and that “masculinity” is nothing more than the most cartoonish parody of caveman masculinity. 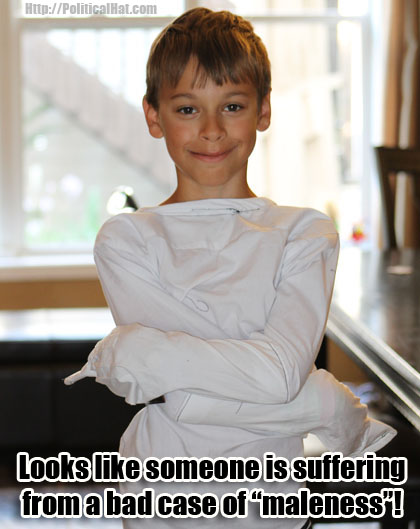 “From the earliest age, they are told to ‘Be a man!’ ‘Don’t cry!’ ‘Stop with the emotion!’ and ‘Man up!’ This ‘guy code’ suppresses their humanity, excites their drive for dominance and renders many of them dangerous. The trailer features adolescent men describing their isolation, despair and thoughts of suicide, artfully interspersed with terrifying images of school shooters and mass murderers.”

In other words, maleness is considered a pathology and a deviation from the gyno-normative reality where girls are normal and boys are just imperfect girls with dangly bits.

The New York Times’ Charles Blow is yet another voice that supports the “masculine as pathological” schtick:

“We teach boys, overtly and implicitly, that sexual potency is a marker of masculinity and that empathy and emotional depth are purviews of a lesser sex. The ways we force boys to adhere to a perilously narrow reading of masculinity become a form of ‘oppression all dressed up as awesomeness,’ as Lisa Wade, an Occidental College sociology professor, put it last month in Salon.

The Wall Street Journal’s James Taranto slaps this ridiculousness down:

“‘Inflames the pathology’ is an example of editorial malpractice. In medicine, a pathology is an underlying disorder that causes disease. Inflammation may be a symptom of a pathology; it is not something that happens to the pathology.

“To characterize men as ‘incapable of valuing their own humanity’ is the kind of invidious stereotype that would never be permitted on the pages of a respectable publication if one were referring to a racial or ethnic minority–or, for that matter, to women. And the masculine drive for conquest–also known as ambition–is very much a part of the human experience. It sometimes takes pathological or destructive forms, but then so do empathy and ’emotional depth.'”

This is why we see “Womyns’ studies” but not “Male Studies”:  Maleness isn’t only just considered false and oppressive but a sickness that needs to be corrected, thus not deserving of a class or major.  Everything the college students allegedly needs to understand “masculinity” is learned from “Womyns’ Studies” courses.  Since they are presumed to be correct, any class that advocates from a male point of view is considered to be wrong and thus ought to be eschewed, since all “studies” majors are primarily about advocating from a pre-determines point of view, and any such “male studies” conflicts with the pre-determined “truth” already present in various grievance studies programs.  As “Judgy Bitch” put it:

“Here we go with obfuscation number one:  the fact that an academic discipline is not embracing feminism as a theoretical paradigm is not the same thing as ‘railing against feminism’.  While it is certainly true that many, many websites are deeply critical of feminist thought … the attempt to conflate an academic discipline that eschews feminist theory as an underpinning as automatically “anti-feminist” is disingenuous at best.”

And the social castration continues…

One Response to When Maleness is Considered a Pathology