Through a Racial Lens

The professor at a Minnesota community college, who was reprimanded for creating a racial hostile environment after White students complained about her rants about “structural racism,” has penned her own personal response to the incident.  Her statement makes it very clear that she can never ob objective, and sees everything through a racial lens. 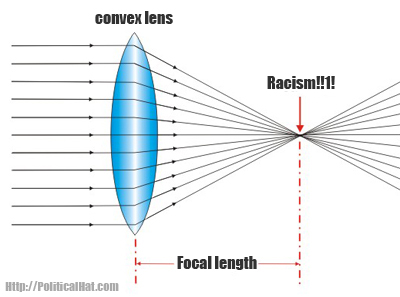 She begins be declaring that she was being punished for turning “the world backwards on an angry White male student.”  Her pseudo-stream-of-conscious diatribe recalls how at an editorial meeting made a noose out of a sweatshirt with a note about the importance of deadlines.  The professor took this as necessarily racist, and then harangued the editorial staff about power, privilege, and violence!

The “White male” editor took umbrage to this and wrote to the professor, stating that her accusations were hateful, and that if she continued such a harangue in the future, she would not be welcome.  At this, the professor went into “Help! Help! I’m being repressed!” mode:

“I checked the windows to make sure they were locked, closed my eyes and began to count to 20 slowly. The thing is, I was never supposed to be there; these institutions were not built for Black women, or anyone of color for that matter, to live or work in. In fact, they were built to keep us out. I know this, intellectually, being a student of history, but every time I come up against the blunt-end truth of it, I still shiver.”

She then wrote a “dispassionate” response, which she carbon copied to a plethora of other people, where she continued to rant about how that editor need to “educate himself about the history of race and white privilege in this country,” while explicitly refusing to apologize.  In other words, she doubled-down, and preferred “to restructure the conversation from an individual critique to systemic and structural critique.”

This little exchange, though, was not what caused her reprimand, though it clearly paved the way for it.

She was asked to try to cooperate with others. To this, she exploded and declared:

“If cooperation implies a kind of stated or unstated agreement with the status quo, then I cannot agree to “cooperate” with the members of my department and college, who are predominantly white, upper-middle class, come from families with a history of college success, and have absolutely no awareness of their own privilege, not how this might impact their interactions with and expectations of our students, who are overwhelmingly brown, working class, and first-generation college students.”

This professor could only see in terms of race, and only on a confrontational basis.

This is seen by another complaint of race and gender discrimination when she “generally promoted a hostile or discriminatory environment for white males based on the actions of a few faculty members who promoted critical race and white privilege theories.”

She could have addressed her concerns in a constructive way.  Instead everything she did was confrontational and antagonistic.  That professor does not deserve the title and has no legitimate place in an institution of higher learning.

One Response to Through a Racial Lens