Genders, Genders, Everywhere, Or Any LGBTQ To Be

An increasingly popular trend has been choose your own gender.  Not limited to the simple male/female binary, new “gender-neutral” pronouns are being pushed on younger and younger people, who are now given the choice of up to seven or eight choices for their “gender.”  Unsurprisingly, this is being pushed primarily at the vanguard of the Progressive destruction of Western Civilization:

“The terms genderqueer, agender, bigender, third gender or gender-fluid, called ‘preferred gender pronouns’ (PGPs), are now bandied about as substitutes for the old stodgy ‘he’ and ‘she.’ 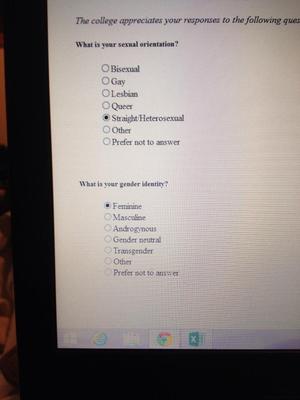 Picture of application to Bellevue College

“Denying reality, however, is precisely what this bizarre gender-neutral language is trying to do.  As a percentage of the whole population, there are very few boys who will be girls and girls who will be boys.  The rest of us are pretty clearly round pegs in round holes and square pegs in square holes, and our English language accurately reflects this actual, rather than politically-correct, reality.”

A “writer-in-residence” at Trinity College has gone so far as to declare, contra to the simple truth Bookworm noted above, that this a natural progression of the language:

“‘The people I know who teach will say “This is weird and it’s cumbersome and it’s not going to last because it’s not organic.”‘ However, she added, ‘Mail carrier did not evolve organically and it’s a lot easier to say mailman. Decades ago there were poets who refused to be called poetesses. Most language has evolved organically, but there have been times—and when it comes to issues of gender there probably have to be times—when there are people willing to push the envelope.'”

No, this is not the natural evolution of a language.  It is an invention and imposition of an elitist few.  It is not evolutionary, it is Intelligent Design by the unintelligent.

And denying reality can be dangerous, with depression and suicide often being the result of people trying to change their body to fit their belief of who they are “on the inside.”

The reality is that men and women are fundamentally different.  Beyond the presence or lack of “dangly bits,” the differences are real and profound.  But this conflicts with the rabid Left’s idea that all people are interchangeable pegs, and that the difference between men and women are just a meaningless physical difference similar the difference between someone who is short or who it tall, or who have different colored skin.  They deny reality, and do whatever they can to support their delusions.  With this comes the threat to those who do not agree with this fantasy of being labeled a “H8er” and being subjected to punishment for daring to refer to people by their natural born biological sex.

2 Responses to Genders, Genders, Everywhere, Or Any LGBTQ To Be