Posted on November 6, 2013 by The Political Hat

When comparing America’s mostly private healthcare system with the socialized systems in other countries, it is oft mentioned by supporters of socialized medicine that people in America live shorter lives, are more obese, &c., than people in developed countries with socialized health systems.  Of course, this is a classic case of lies, damned lies, and statistics.

One of the better metrics of comparison is the survival rate for cancer.  With healthy people, or those who need relatively cheap medical assistance with a high probability of effectiveness, socialized medicine is great since they don’t have to directly pay much money out of pocket.  However, it is in those cases where a disease is severe or the chance of survival is far from certain, and treatment often very expensive, that we can best judge.  The United States, with its uninsured and “greedy” private healthcare market ranks right up there in the top ranks. 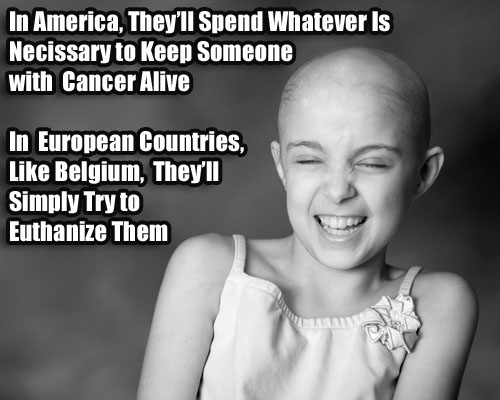 Unsurprisingly, the reality of the situation has led to some advocates of socialized healthcare to incoherently declare that that isn’t really so.

The so-called “factcheck.org,” for example, makes some ridiculous claims, and contradicts itself, in order to declare the facts to be untrue.

For example, the “fact checkers” admit that “[i]t’s certainly the case that we have higher survival rates than the United Kingdom and other countries with nationalized health care. Across the board, the United States boasts a higher five-year relative survival rate than the European average”, but then turn around to say “survival rates in Canada, Japan, Australia and Cuba were all comparable to or higher than U.S. survival rates”.    While this shows that some countries that have socialized systems can provide results that are comparable to the U.S., this does not indicate that this is because of the systems themselves, particularly with Canada which has access to the free-market system in the United States for when their own system tell them to take a couple of aspirin and come back later.  What it does show is that socialized systems can and often do end up being worse than the private model in the U.S., even for those who are uninsured: Colorectal cancer survival rates in the U.S. for the uninsured is at 49%, while it averages at only 45% in Europe!  Even within the U.S., Medicaid has no significant effect on health outcomes vs. being uninsured!

Sure, being uninsured is more comparable to living in a system of rationed healthcare, but that underscores that insurance in the U.S. was just that good, and perhaps instead of destroying that, we should seek to expand it.

They also try to claim that survivor rates are skewed because they are caught earlier in the U.S. and thus the higher rates could be because people knew about it longer, not that the healthcare made a difference.  Of course, they also note that early detection does mean a better chance at survival.  That it is being detected earlier in the U.S. is an indicator of the superiority of the U.S. private system.

While there are an infinite number of ways of parsing that data, the fact is that when it comes to cancer, and likely other examples where expensive treatments are necessary in order have a chance to survive, the United States does much better, and that those statistics are much, much better measuring sticks than overall life expectancy.

This entry was posted in Healthcare and tagged Europe, NHS, Obamacare, Science. Bookmark the permalink.

One Response to Lies, Cancer, and Statistics