Some parents complained to the school where their children attend about a “absurdist” play, “The Goat, or Who is Sylvia?”, involving incest and bestiality that was taught in class.  While some parents complained, others seemed happy to defend having students read a play where:

“[A] middle-aged man leads an ideal life with his wife and teenage son, until he admits that he is also in love with a goat named Sylvia, with whom he has had sex. The play explores themes of tolerance, morality and revenge, and includes scenes of homosexuality and incest.” 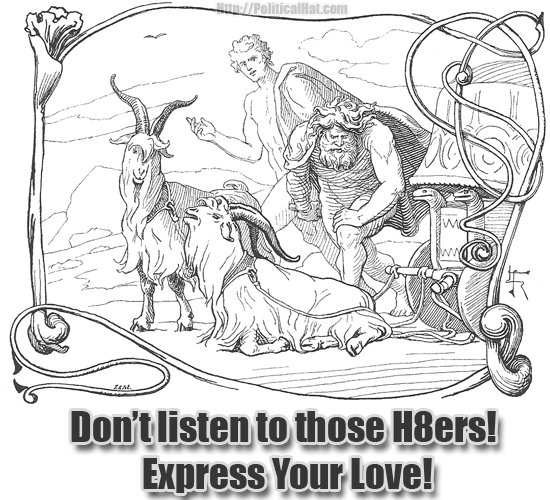 While students were given the option of studying an alternate script and were told in the class syllabus that “students may be exposed to stories or characters that express views and beliefs that differ from their own or those of their parents,” this should not excuse the fact that sexually explicit content involving goats was put forth in a school as a paragon of literary genius worth elevating over so many other works.

One student defended the play as “an absurdist play — absurd being a really key word. It wasn’t introduced as some sort of lesson to teach us something. It was introduced to us as a work of art.”

Nothing now-a-days seems like it is “just a work of art.”  Leda and the Swan, this is not.

With constant exposure, students will begin to see it as not that big of a deal.  It is just another tool where society is de-legitimized by being portrayed as absurd and thus ridiculous to seriously defend.  It is this difference that distinguishes between this play and, for example, the work of Apuleius.

Modern-day “Art” is both a symptom of the decline and fall of Western Civilization, and one of the main tools used to destroy it.

This entry was posted in Education and tagged FAIL. Bookmark the permalink.

2 Responses to Education Today: Where Bestiality is Innocent Absurdity!