California is once again proving that it is the Fools Golden State.  The California Grand Soviet Legislature is poised to pass a law requiring permits to buy ammunition, in the form of Senate Bill 53.  The permits may take as long as 30 days, and may even be denied due to bureaucratic snafus.    The waiting period for buying a handgun, by the way, a handgun in California is only 10 days (technically ten 24-hour periods).

“Senate Bill 53 last December, which would require anyone wishing to purchase ammunition in California to first obtain a Ammunition Purchase Permit issued by the Department of Justice, valid for one year from the date of issuance.

“To obtain such a permit, the holder would have to pass a traditional background check as well as a mental health check, according to De León. The legislation would also ban online and mail order sales of ammunition to Californians.

“In addition, SB 53 would require all ammunition sales to take place at a limited list of State-approved “ammunition vendors”, who would also be required to submit sales records to the CA Department of Justice.” 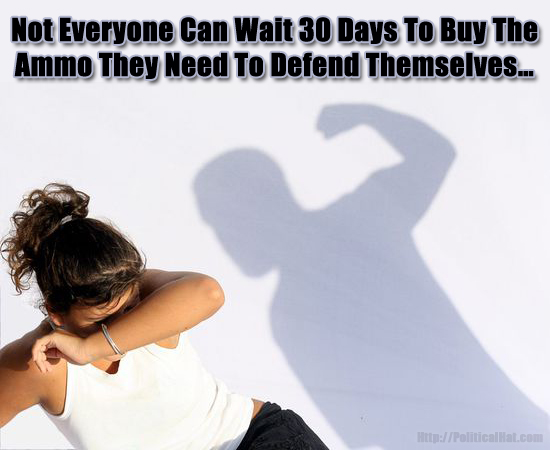 It should be noted that California is one of the few states which do not have an explicit protection for the right to keep and bear arms.  Though even if it did, the Democrats in control would just kill it off like they did Prop. 8

The real take home message can be gleamed by the bill’s author stating that “the legislation is intended to address an apparent loophole in California law that allows anyone – including convicted felons – to buy ammunition just about anywhere.”

For the California Progressives, freedom is a loophole that must be plugged.