It Was NEVER About Tolerance…

The Progressive left have often screeched “tolerance” and condemned all those who do not “tolerate” their way of life and beliefs.  Of course, what they call “tolerance” has mutated over time to mean “enthusiastic affirmation.” 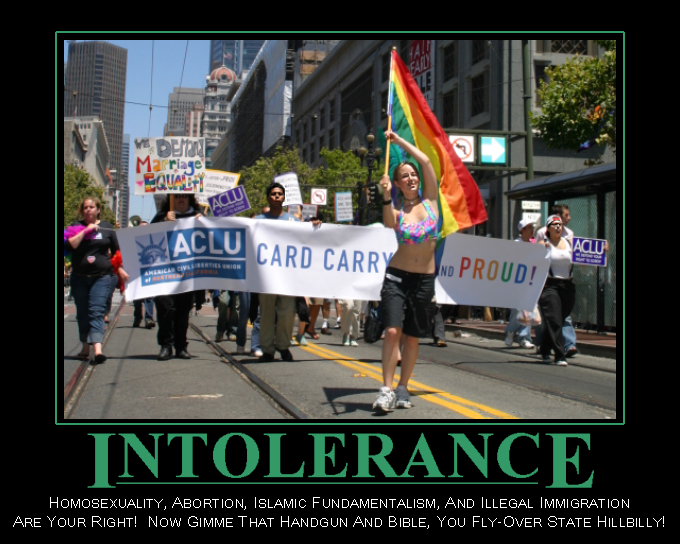 With their taking of power and the ability to shove their twisted malum-normative* ethos, they have hypocritically shown absolute intolerance to those who dare not enthusiastically affirm their own beliefs.  No where can that bee seen by some of the lunacy when it comes to children and genderbending/sexuality.  Dave Blount, from Moonbattery, takes note of the California Grand Soviet Legislature passing a law to mandate that children can go into whatever bathroom they want depending on what “gender” they identify with.  Of course, the bathrooms are set up in large part due to differences in actual biology (e.g. the presence or lack of urinals).  That this could bother some children, make them uncomfortable, or even lead to harassment is irrelevant.  Since “tolerance” has been narrowly defined  de facto as being something that only applies to what the gender-bending Progressives believe, and never to what they loath and despise, any child bothered by this will never receive tolerance, but may very well be persecuted for speaking out!  Blount lists plenty of malum-normative legislation, including legislation signed by faux Republican Arnold Schwarzenegger.  Two pieces of legislation, however, stand out as examples of where “tolerance” is used as an excuse to practice intolerance.

SB 543, signed by then-Gov. Arnold Schwarzenegger in 2010, “allows school staff to remove children ages 12 and up from government schools and taken off-campus for counseling sessions, without parental permission or involvement.”

In a state where it was made illegal for a professional head-shirker to suggest that a kid might not be gay, the state is allowed usurp the roll of parent and allow a student to be “counseled” under the guidance of whatever quack the Progressives, who have a death-grip on education in California, decide.

ACR 82, approved by the California Legislature in 2010, “creates de facto ‘morality-free zones’ at participating schools (pre-kindergarten through public universities). Schools that become official ‘Discrimination-Free Zones’ will ‘enact procedures’ (including mandatory counseling) against students from pre-kindergarten on up who are accused of ‘hate,’ ‘intolerance,’ or ‘discrimination.’” The definition of “hate” includes peacefully speaking or writing against the unnatural lifestyles choices of homosexuality and bisexuality.

Dissent is not allowed.  You will be made to agree with the Progressives.  You will not be tolerated.  If you are forced to call a boy a girl, you must repeat their lie or else you will be labeled as being in need of “counseling.”  You will comply or be punished; your incorrect opinion will not be tolerated but rather “corrected.”   With the recent push to prohibit anyone who is even spuriously reported by some quack psychologist fro excercising their 2nd Amendment rights, those who do not cave and agree with the Progressive left’s unnatural view of gender/sexuality may very well see their Constitutional rights forever stripped away.

It was never about tolerance.  Tolerance was just and excuse to put the camels nose inside the tent, and then push bit by bit ever closer to eradicating “incorrect” thinking and morality, so as to replace it with their own views.

The Progressive left used the real tolerance of our culture to destroy it.  The Progressives do not fear the reverse happening, for only the “tolerant” can be so utterly intolerant.

This has not ended well.

*Or should it be “Mali-Normative”? Anyone who understand latin based prefixes, please let me know.