One such flag, which has seen more recent official use is the “First Naval Jack”. 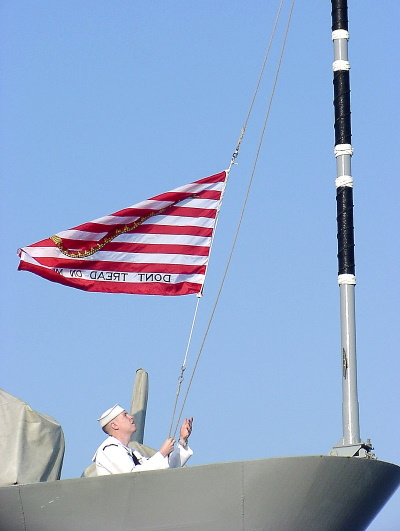 “According to legend the First Navy Jack Flag, which is sometimes called the Continental Navy Jack, was raised on the first US Navy ships in the fall of 1775. The Congress had just created the Navy and they appointed Commodore Esek Hopkins, a Rhode Island captain, as the first naval Commander-in-Chief. Hopkins issued a set of fleet signals. The attack signal was to be the raising of “the striped Jack and Ensign at their proper places” from his command ship, the USS Alfred.

“The exact design of the flag was not specified, but the traditional belief is that the First Navy Jack Flag consisted of 13 red and white stripes with a stretched out rattlesnake across the center. The words Don’t Tread on Me stretched across the bottom below the snake. It is likely that John Paul Jones would have raised the First Navy Jack Flag on Commodore Hopkins’ flagship since he was the ship’s first 1st Lieutenant.” 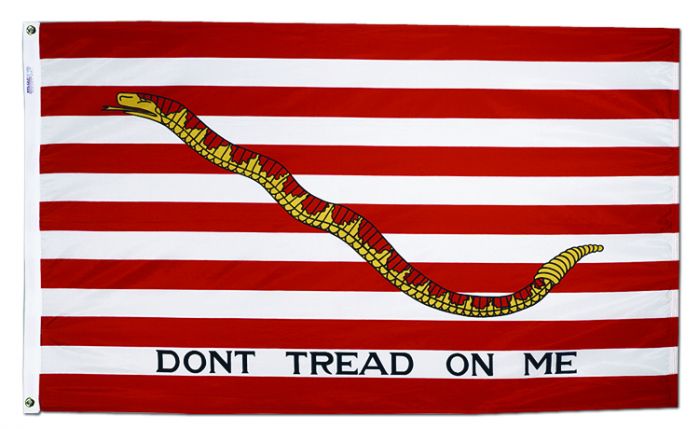 The specifics may have been a confluence of different flags and a misunderstanding.

“In 1778, John Adams and Benjamin Franklin wrote a letter to the Ambassador of the Kingdom of Sicily, thanking him for allowing entry of revolutionary ships into Sicilian ports. The letter describes the new flag of the colonies according to the 1777 Flag Resolution, but also describes a flag of ‘South Carolina, a rattlesnake, in the middle of the thirteen stripes.’

“The rattlesnake had long been a symbol in the colonies of resistance and defiance to the Crown. The phrase “Don’t Tread on Me” may have been coined during the American Revolutionary War, a variant perhaps of an earlier image. A snake severed in segments and labelled with the names of the colonies and the legend “Join, or Die”, had first been published in Benjamin Franklin’s Pennsylvania Gazette in 1754, as a political cartoon reflecting on the Albany Congress.”

Regardless of the origin, this flag has been on multiple occasions the official naval jack of the United States Navy.