South Africa In A Widening Gyre

South Africa has spiraled into riots, looting, and general lethal mayhem. While the arrest of former South African President Zuma for corruption was the tinder that lit this fire, the brush was already primed to burn in this nation which was once considered a paragon of “social justice” and praised by the late United State Supreme Court justice Ginsberg. 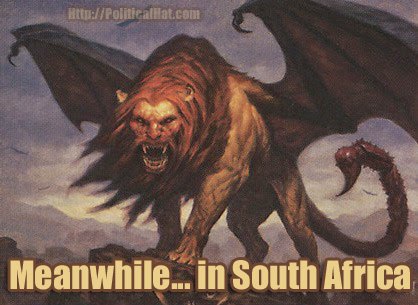 The death toll continues to rise, and the police and military were finding it hard to obtain more ammunition. This, unsurprisingly, isn’t some romantic uprising against injustice: It is a chance to lash out and loot as people die and some have to resort to throwing their own children off of buildings in the hopes of saving them!

Of note, food warehouses in Durban, in KwaZulu-Natal, have been burned and the ports shut down, which means that one of the major food hubs for not only South Africa but a good portion of southern Africa is effectively choked as a food supply resulting in food shortages.

Interestingly, there have been what appears to be reports from South Africa indicating that much of this violence is also creating a racial divide—not between White vs. Black—but the dominant Bantu ethnic groups vs. non-Banut groups including Afrikaners, non-Afrikaner Whites, Colourds, and even Black Khosian populations (all of whom were in the western part of the country before the expansion/conquest by the Bantu speaking peoples), as well as those of South and East Asian descent.

The problems South Africa faces are not the problem of an Apartheid system that disappeared long ago, but with the corruption of the current ruling class, and there are no signs that’s going to change for the better.