A Deficiency Of Healthcare Is A Problem

It has been noted that having too much healthcare available is a problem that few would have qualms with, and is certainly better than a “right” to “free healthcare” that you will be denied for an entire decade.

“A few days ago Robin Swann, the Health Minister for Northern Ireland (where I sit as I write this) announced that it will likely take ten years to sort through the backlog in elective care here. No, that’s not a typo. Ten years.

“There are men, women, and children currently scheduled for screenings and elective treatments here in Northern Ireland who are expected to receive neither until 2031 a.d. Several oncologists have given interviews to various British media outlets over the past week basically conceding the likelihood that many of my neighbors here in Ulster will die of cancer and other fatal diseases in the coming years without ever having been diagnosed. More and more are turning to crowdfunding in an attempt to access private treatment in a timely manner.” 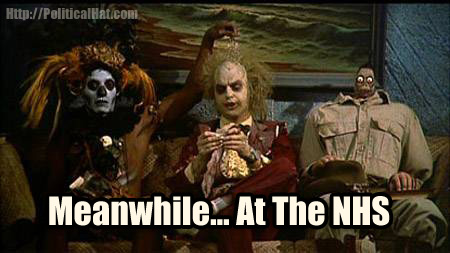 It just goes to show you that you get what you pay for.

This entry was posted in Healthcare, Progressives and tagged NHS, RIP. Bookmark the permalink.

3 Responses to A Deficiency Of Healthcare Is A Problem