War On The ‘Burbs 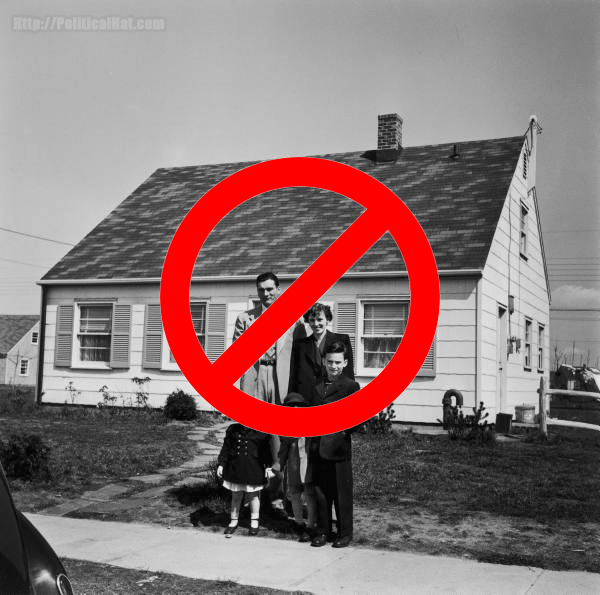 The Obama administration’s “Affirmatively Furthering Fair Housing” initiatives to turn the suburbs and housing in general into centrally controlled Leftist utopias has reared its head again under the Biden Adminitration’s housing policies… give or take a furry. All of this—legislatively—is being pushed in the “Infrastructure Bill”.

“With the introduction of his massive, $2.3 trillion “infrastructure” bill, President Biden’s campaign to end suburban single-family zoning has begun

“How, exactly, does Biden plan to end single-family zoning? According to the fact sheet released by the White House, “Biden is calling on Congress to enact an innovative new competitive grant program that awards flexible and attractive funding to jurisdictions that take concrete steps to eliminate [‘exclusionary zoning’].” In other words, Biden wants to use a big pot of federal grant money as bait. If a county or municipality agrees to weaken or eliminate its single-family zoning, it gets the federal bucks.

“The wildly overreaching Obama-Biden era Affirmatively Furthering Fair Housing (AFFH) regulation — which Biden has pledged to revive — works in a similar fashion. The difference is that by adding another gigantic pot of federal money to the Community Development Block Grants that are the lure of AFFH, Biden makes it that much harder for suburbs to resist applying — and that much more punishing to jurisdictions that forgo a share of the federal taxes they’ve already paid so as to protect their right to self-rule.

“Are federal carrots enough, however? Prosperous suburbs may forgo the grants in an effort to secure their independence. The success of Biden’s initiative depends in part on exactly how much money gets allocated to grants tied to zoning reform. The details of that ask haven’t yet been released, but the $213 billion allocated to Biden’s total affordable housing initiative leave room for an awfully big pot for the anti-zoning portion.

“If there aren’t enough carrots, however, how about sticks? During the campaign, Biden backed a draconian plan to withhold federal transportation grants for road repair from suburbs that refuse to kill off single-family zoning. That hasn’t been proposed by Biden, and the reason is fairly obvious. Democrats don’t yet have the votes to pass such a law. The only way they can get around the filibuster is to squeak spending bills through Congress under the rules on ‘reconciliation.’ So, for now, it’s carrots all the way down. If Senate Dems expand their majority and kill the filibuster in 2022, however, out come the sticks and down goes suburban zoning.”

This, ironically, gives the Republicans a chance to win back the suburbs, which they have been increasingly losing their grasp on in the past five years, if not longer… provided that they are smart enough to not waste an opportunity.

“Biden and the Democrats are working overtime to undermine the federalist system in which zoning and education are local concerns. In each case — housing and education — the plan is the same: use federal grants to hook states and localities into conditions that will effectively override their authority. Kill suburban zoning and force leftist action civics and critical race theory on red-state schools. Siphon off taxes and return the money to taxpayers with conditions that effectively gut the foundational layer of our federalist system — the layer closest to the people.

“If Republicans have the good sense to make an issue of Biden’s attack on single-family zoning, it will split the Democrats down the middle. The media will keep trying to cover for Biden. But once the administration begins enforcing AFFH, the reality of his policies will emerge. College-educated suburban Democrats won’t like that. Republicans are split on this issue as well, however, although the split is more politicians from the base than a split within the base. Under Obama, House Republicans overwhelmingly voted to defund AFFH, but Senate Republicans divided. This time, the GOP ought to get smart and expose Biden’s ‘infrastructure’ bill as the anti-suburban zoning bill it in fact is. That would change the ‘infrastructure’ narrative from a Christmas tree studded with goodies to a hammer to smash your way of life.”

The major weapon Biden and the Left have is the ignorance of the people and if they let themselves be the proverbial “boiling frog in a pot”.

Time will tell, unless that is also considered in the future to be doubleplusungood.

This entry was posted in Progressives and tagged Economy, Leviathan, Obama, Social Justice. Bookmark the permalink.

One Response to War On The ‘Burbs