One such flag is the Bedford Flag: 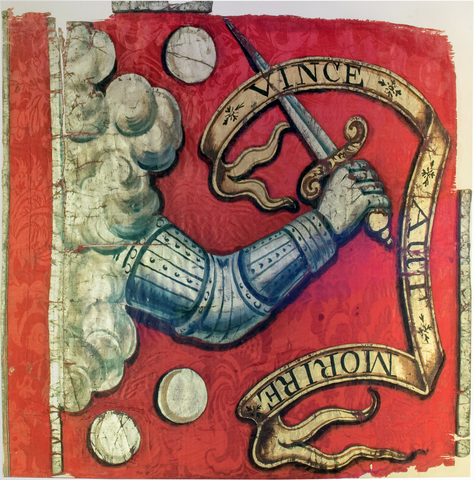 The Bedford Flag is the oldest known flag in the United States. It is associated with the Minutemen of Bedford, Massachusetts and the Battles of Lexington and Concord of 1775.

The painted-on design depicts an armored arm grasping a straight sword. The two sides are asymmetrical; the sword appears behind the motto on one side and appears in front of it on the other. The Latin motto VINCE AUT MORIRE (“Conquer Or Die”) reads from top to bottom on one side and from bottom to top on the other.

Page family oral tradition, later recounted for historians, held that the Bedford militia’s flag was in the custody of the Page family at the time of the American Revolution, and that Nathaniel Page took it into battle at Concord.