A Paragon of Modern Academia: White People (& Other Undesirables) F**k Off

A university in the Canadian city of Halifax, which has an indigenous population of 0.00%, is refusing to hire anyone who isn’t a “racially visible, Indigenous candidate” for a top position:

“Dalhousie University is restricting its search for a new senior position to racially visible and Indigenous candidates in an effort to make the institution more diverse.

“In an email to the university community, provost and vice-president academic Carolyn Watters wrote that ‘community consultation is essential to the success of the search’ for a new vice-provost student affairs.

“‘In keeping with the principles of our employment equity policy, and with an aim to increase the representation of under-represented groups at Dalhousie, this search for a new vice-provost student affairs will be restricted to racially visible persons and Aboriginal peoples at this time,’ she wrote.” 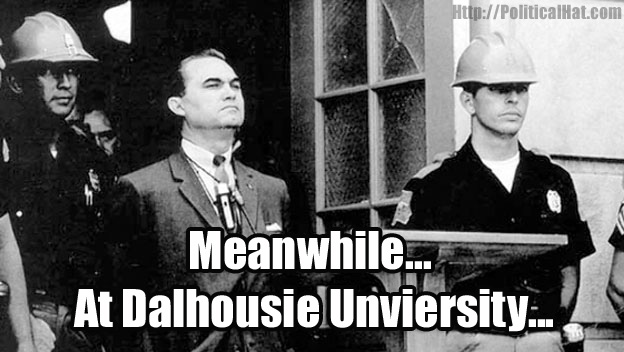 The city of Halifax is over 94% White, with most of the rest being mixed-race. Compared to Dalhousie, non-Whites, including indigenous persons, are over-represented vis a vis the demographics of Halifax.

“According to Dal’s 2016 Be Counted census campaign, the percentage of racially visible employees increased to 11 per cent in 2016 from 8.3 per cent in 2015, with the largest gains in faculty positions.

“The representation was also far less in academic management positions, with 4.7 per cent identifying as racially visible and 1.6 per cent as Indigenous.”

Halifax seems to be a magnet for racial discrimination. Will anything be done? Certainly not with Canada’s current Prime Minister in power…