Evan Sayet has many insightful views into Leftist thought, and their fundamental dishonesty.   However, like many, he seems a bit impatient vis a vis “fighting back” and incorrectly equates civilized and gentlemanly behavior with surrender as well as equating with fighting at best brawling and at worst flailing. 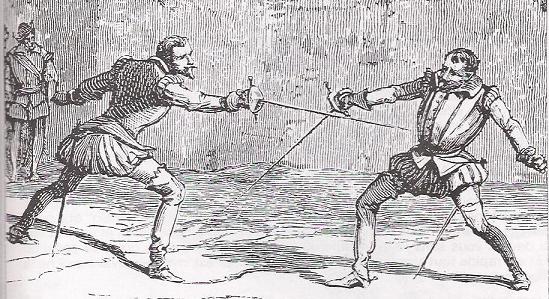 Sayet, in an article entitled “He Fights” argues:

“We Right-thinking people have tried dignity. There could not have been a man of more quiet dignity than George W. Bush as he suffered the outrageous lies and politically motivated hatreds that undermined his presidency. We tried statesmanship. Could there be another human being on this earth who so desperately prized ‘collegiality’ as John McCain? We tried propriety – has there been a nicer human being ever than Mitt Romney? And the results were always the same.

“This is because, while we were playing by the rules of dignity, collegiality and propriety, the Left has been, for the past 60 years, engaged in a knife fight where the only rules are those of Saul Alinsky and the Chicago mob.

“I don’t find anything ‘dignified,’ ‘collegial’ or ‘proper’ about Barack Obama’s lying about what went down on the streets of Ferguson in order to ramp up racial hatreds because racial hatreds serve the Democratic Party. I don’t see anything ‘dignified’ in lying about the deaths of four Americans in Benghazi and imprisoning an innocent filmmaker to cover your tracks. I don’t see anything ‘statesman-like’ in weaponizing the IRS to be used to destroy your political opponents and any dissent. Yes, Obama was ‘articulate’ and ‘polished’ but in no way was he in the least bit ‘dignified,’ ‘collegial’ or ‘proper.'”

Sayet seems to be engaging in manichean thinking, and unrealistically to boot. He seems to equate both an incompetency and lack of will with “dignity”, and in equal measure conflates victory celebrations with actual strategic fighting.

This has led Sayet, and far too many others, to act out the roll of Mark Twain’s proverbial cat:

Having equated gentlemanly behavior with losing or even deception, many will eschew any politician who doesn’t overtly want to brawl and declare a knife fight to be on, with all the accompanying sound and fury that comes therewith.

Alinsky’s “Rules for Radicals” is not the “ur-playbook” of the Left. It is a tactical level guide to be used when, and if, it is deemed useful. Above that, the Left have been successful by not being seen as fighting dirty, even though they may be. As Machiavelli noted:

“But it is necessary to know well how to disguise this characteristic, and to be a great pretender and dissembler; and men are so simple, and so subject to present necessities, that he who seeks to deceive will always find someone who will allow himself to be deceived.

“Therefore it is unnecessary for a prince to have all the good qualities I have enumerated, but it is very necessary to appear to have them. And I shall dare to say this also, that to have them and always to observe them is injurious, and that to appear to have them is useful; to appear merciful, faithful, humane, religious, upright, and to be so, but with a mind so framed that should you require not to be so, you may be able and know how to change to the opposite.

“For this reason a prince ought to take care that he never lets anything slip from his lips that is not replete with the above-named five qualities, that he may appear to him who sees and hears him altogether merciful, faithful, humane, upright, and religious.”

As to Obama, while to some his true nature was seen, to enough people to be elected twice to the Presidency the opposite was perceived.

“The problem is that, through these years, the Left has been the only side fighting this war. While the Left has been taking a knife to anyone who stands in their way, the Right has continued to act with dignity, collegiality and propriety.

“With Donald Trump, this all has come to an end. Donald Trump is America’s first wartime president in the Culture War.”

Sayet is quite familiar with the down and dirty tactics of the Left, but perhaps he doesn’t see how it is selectively deployed. The violence of late on college campuses is not a declaration of a down and dirty fight, to which people on the right only lose because they act as gentlemen, but of a victory celebration over what the other side has already lost. Further, it is not accurate to say that the culture wars the Left have started are now only being fought against. The Left have been waging this war primarily sub rosa and under a “dignified” and “proper” façade with the open “knife fights” serving only to help hide how the magic trick is actually being carried out and perhaps also to rally the useful tools who are utilizing Alinsky’s “rules”.

Of course, the “he fights” quip comes from Lincoln justifying U. S. Grant’s ungentlemanly behavior off the battlefield. Lincoln defended Grant because Grant not only fought, but fought and won. Patton, another example given, was not above vulgar language and blunt talk when it suited his purpose, but always strove to act like an officer and a gentleman and expected the same from others.

Indeed, Patton fought according to the rules of war and the Geneva convention and, even in victory, treated the enemy with the dignity and respect as soldiers. Indeed, such niceties are necessary. The Geneva conventions exist for a reason, and restraints on barbarism do not preclude the waging of effective war. Similarly, dueling is violence and infliction of harm, but allows even the most hated of foes to avoid potentially both dying due to more gentlemanly conventions; ’tis also far better than a violent ambush, particularly if the other side gets to you first. However, if you do throw out these conventions and pull out a knife, make sure that you are not putting yourself in a position to let your target have the justification for pulling out a gun and shooting you in the head.   As the character Emperor Paul-Muad’Dib in “Dune Messiah” noted:

“The convoluted wording of legalisms grew up around the necessity to hide from ourselves the violence we intend toward each other.”

And it is those social niceties that allows people to get away with things that the more vulgar never could. This is why the Senate Democrats partial filibuster “nuking” in conjunction with their undignified “knife fight” behavior allowed the Senate Republicans to confirm Gorsuch with neither Sturm nor Drang. The lack of such social nicities from some quarters, perhaps, is what ultimately led to the failure to make any change to Obamacare. Many sources are reporting that Sen. McCain voted against even a mild Obamacare repeal as revenge against Donald Trump, who went out of his way to repeatedly insult and verbally harass McCain. If true, then perhaps had Trump at least seemed to have at least a modicum of gentlemanly attitude towards McCain, then perhaps that would have allowed McCain to go along with the Obamacare change, even with the actual levels of hostility between the two being the same, or even worse.

In other words, those niceties to hide our hostile intent exist for a reason. One does not win friends and influence people by insulting them.

Instead of fighting, brawling was opted for. Meaner actions can be useful and have no lasting impact… if one wins. But below brawling is flailing, and the MSM slapfight is indicative of such flailing. It might feel good, but ’tis but the sound and the fury.

Finally, some wisdom from Muad’Dib:

“There exists a limit to the force even the most powerful may apply without destroying themselves. Judging this limit is the true artistry of government. Misuse of power is the fatal sin. The law can not be a tool of vengeance, never a hostage, nor a fortification against the martyrs it has created. You can not threaten any individual and escape the consequences.”

This entry was posted in Healthcare, Progressives and tagged Democrats, GOP, Obamacare, Taxes. Bookmark the permalink.