“Hawaii may trail blaze and become the first to offer guaranteed basic income.

“A bill was recently passed through both the houses and state legislature in a unanimous vote that declares that all Hawaiians ‘deserve basic financial security’ and prompts state agencies to look over ‘universal basic income’ along with other policy.”

The “universal basic income” is a fantasy that posits that with modern technology, people will be freed by free stuff from the government to elevate themselves into a creative and harmonious utopia. This is just a rehash of the concept of the “Purple Wage”, a concept in the science fiction novel “Riders of the Purple Wage“:

“Riders of the Purple Wage is an extrapolation of the mid-twentieth century’s tendency towards state supervision and consumer-oriented economic planning. In the story, all citizens receive a basic income (the purple wage) from the government, to which everyone is entitled just by being born. The population is self-segregated into relatively small communities, with a controlled environment, and keeps in contact with the rest of the world through the Fido, a combination television and videophone.” 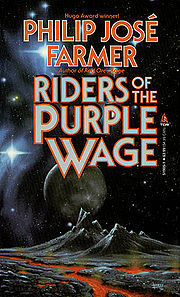 While Alaska gives people free money via the Alaska Permanent Fund, Alaska’s fund is funded by oil revenues. Further, unlike Hawaii, Alaska doesn’t have, rather steep, income and sales taxes. Free money for those who don’t produce and high taxes on those who do? Yup, from each according to their ability, to each according to their need. This is how the Left plans for a radical equalization of income:

“[N]ow the left has expanded its goals to policies that are far more radical. Instead of a well-meaning (albeit misguided) desire to protect people from risk, they now want coerced equality.

“And this agenda also has two components.

If there is anyone who can create a hell from a paradise lost, it’s the Left.

One Response to Hawaii Poised to go Full Purple Wage