When a baker (or a florist or photographer) refuse to use their personal creative abilities to promote and endorse a same-sex wedding, we are told that the baker has surrendered their 1st Amendment rights because they are making money off of providing their services. Who is being served, and what is being served, is conflated, and incorrectly so.

But if a business has no 1st Amendment rights to refuse to facilitate a message they disagree with, then by what moral right do they claim to punish people for stating unapproved beliefs outside of the service and message they had already happily agreed to?

None, of course. But that didn’t stop Castle Face Records from dropping the band Dream Machine from the label despite happily releasing their debut record!

“Matt Jones of Castle Face Records, announced via Facebook today that the label he co-founded with John Dwyer of Thee Oh Sees is discontinuing its relationship with the loosely Austin-based band Dream Machine following comments made by the band’s core duo Matthew and Doris Melton in an interview with the Brooklyn-based website Still in Rock.

“Last month, the California-based label released the band’s debut album “The Illusion.” On Thursday, label reps said they will no longer be working with the band after reading about “some ugly opinions” the band members expressed about immigration, feminism and sexual assault.”

And what the problematic message? A blunt statement by a legal immigrant:

“Doris Melton, who came to the United States from Bosnia told the website she was ‘glad they’re finally starting to work on deporting criminal illegal aliens too. It took ages for me to get my green card here legally and because there’s so many illegals coming in they make it hard for the people who do want to become part of American society the right way. They’re handing out free money to people who come here illegally, but when you want to work hard to become an American citizen to start a family they make it so hard on you, and expensive!’

“Later in the interview, Doris Melton was asked to name something that bothers her about the music industry. She responded by saying ‘girls have mostly become lazy jellyfish and are starting these horrible feminist bands just to try and “show men what they got”.’

“She went on to say, “The safe space mentality has made them weak. They don’t even know how to play their instruments! They’ll make songs about being ‘sexually assaulted’ or about how ’empowering’ abortions are or some (expletive) and it’s (expletive) retarded, they’re embarrassing themselves. If men did that they would be crucified! You see the longing for a gender supremacy under the guise of ‘equal rights.’ What happened to the incredible female singers from back in the day with real talent, singing about finding true love and wanting to be a good woman?”

Unlike with the case of the bakers, florists, and photographers, the record label was not even asked to use their resources to spread this message. Like, however, the conflated scenario of who vs. what is being served, the record company refused to deal with people for reasons beyond the scope of the service being provided.

In this case, by what moral right does the record company have to not bake the “musical” cake, so as to speak? 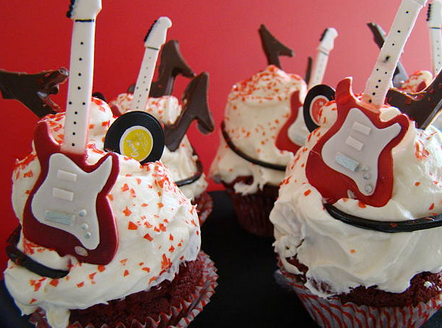 Some more from Dream Machine:

Update: Interview with the band over the controversy:

This entry was posted in Progressives and tagged Mood Music, Social Justice. Bookmark the permalink.

One Response to Bake The Musical Cake